I call BS and here's why. 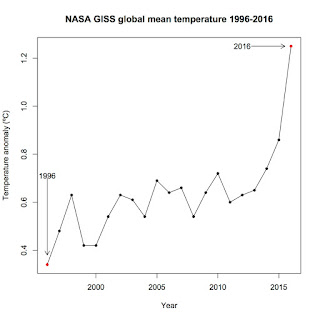 It's not just NASA that shows that 1996 is cooler than 2016. The satellite temperature records show the same. 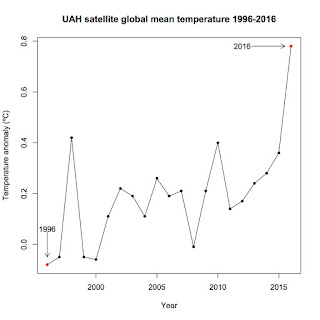 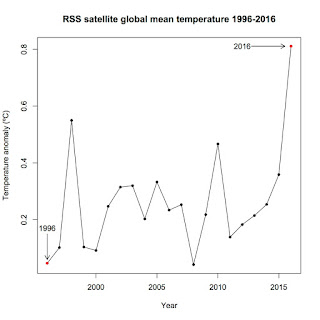 So, if both surface and satellite temperature records agree that 2016 is far warmer than 1996, where is that meme author getting the lie that 1996 and 2016 have the same mean temperature?

Fourth, that meme displays a gross ignorance in what makes up a trend by implying that if the start and end points are the same, there cannot be a trend.  In reality, it wouldn't matter even if 1996 and 2016 did, in fact, have the same mean temperature.  A trend is far more than just its start and end points.  Even if you altered the end point, there would still be a warming trend.  It may not be as large but the trend would still exist.  Here's an example using the NASA GISS data I displayed above.  I just altered the end point of the second graph so that it would have the same value as 1996 before I calculated the trend. 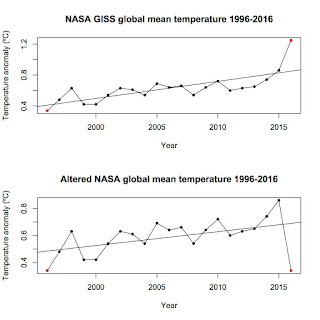 As you can see, the warming trend still exists in the lower graph despite altering the end point.  It's not as large ("only" 0.102ºC/decade versus 0.221ºC for the original data) but it is still statistically significant (p = 0.0257).

So in summary, whoever made up that meme 1) lied about their numbers, 2) is ignorant of the actual temperature data, and 3) abjectly ignorant of basic statistical concepts.  And then they had the balls to call Al Gore and progressives liars.  How quaint.
1996 2016 Facebook meme global mean temperature