Showing posts from December, 2013
Show all

This idea might get some US politicians to do their jobs

This sounds like a good idea.  Who knows?  Hitting science-denying politicians in one of the areas it hurts most (their public image) might do wonders for their ability to comprehend the science.   You can find out more about this plan (plus plenty of other information at http://climatenamechange.org .
Post a Comment
Read more

A pause in global warming? What pause?!?

Much has been made of the pause in global surface temperatures since 1998.  Among the factors advanced to explain that pause include a change in ENSO, a decline in solar output, and an increase in aerosols (i.e. Foster and Rahmstorf 2011 ).  One of the previously neglected factors is artificial cooling in global surface temperature data sets.  Neither the HadCRUT4 nor the NOAA temperature data cover the polar regions.  As the polar regions are the fastest warming areas on Earth (UAH Arctic trend since November 1978: +0.44ºC per decade, Global trend: +0.14ºC per decade), excluding those regions leads to an artificial cooling bias in the data. Anomaly map of HadCRUT4, showing the gaps in data coverage (in white) Both NOAA and GISS are artificially cooled by an outdated ocean temperature data set (HadSST2) that doesn't account for the change from ship-based temperature measurements to buoy-based temperature measurements that occurred within the last 10 years ( Kennedy et al.
Post a Comment
Read more

It's cold in my backyard! Does that mean there's no global warming? 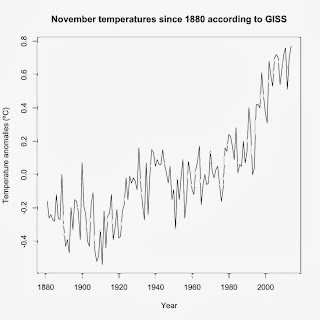 Since October, deniers in the US have been pointing to the colder-than-normal weather in the US to claim that global warming has stopped.  In a twist that should blow their minds, NOAA/NCDC and GISS have both announced that November 2013 was the hottest November globally in recorded history. How can global temperatures set record highs if the US is so cold?  A temperature anomaly map from GISS answers that question nicely: Map available from NASA GISS Notice anything?  Yep.  Canada and the USA (particularly the Great Lakes region and Northeastern US), along with the Antarctic Peninsula are pretty much the only parts of the entire planet that were below average in November.  The rest of the Earth was average to well above average (check out Siberia!).  That's why November 2013 was the hottest November for the entire planet since at least 1880. The same global anomaly pattern appears in satellite data as well.  Lower tropospheric UAH data, which measures air temperatures 1,
1 comment
Read more 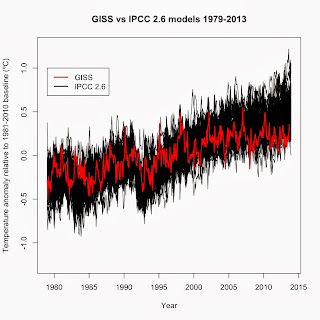 One of the dominant memes among climate deniers are that climate models are inaccurate.  While true, particularly since 1998 (see Fyfe et al. 2013 ), that fact doesn't mean that global warming isn't happening or that global warming is due to a natural cycle and not CO 2 as many deniers claim.  For those leaps of logic to be true, the entire field of radiative physics, 152 years of experiments, and 40+ years of satellite observations would all have to be wrong.  Nor does it mean that climate isn't as sensitive to changes in radiative forcing as multiple studies have shown it to be (i.e. Paleosens 2013 ).  What it means is far more complex. To illustrate this complexity, I compared IPCC AR5 climate models with surface temperatures (GISS).  The AR5 models were run with four scenarios, labeled RCP 2.6, RCP 4.5, RCP 6.0, and RCP 8.5.  Data for each scenario, along with global temperature data, AMO, PDO, etc. are available at Climate Explorer .  The RCP scenarios span the rang
2 comments
Read more
More posts