Showing posts from January, 2014
Show all

The problem with "All of the above" 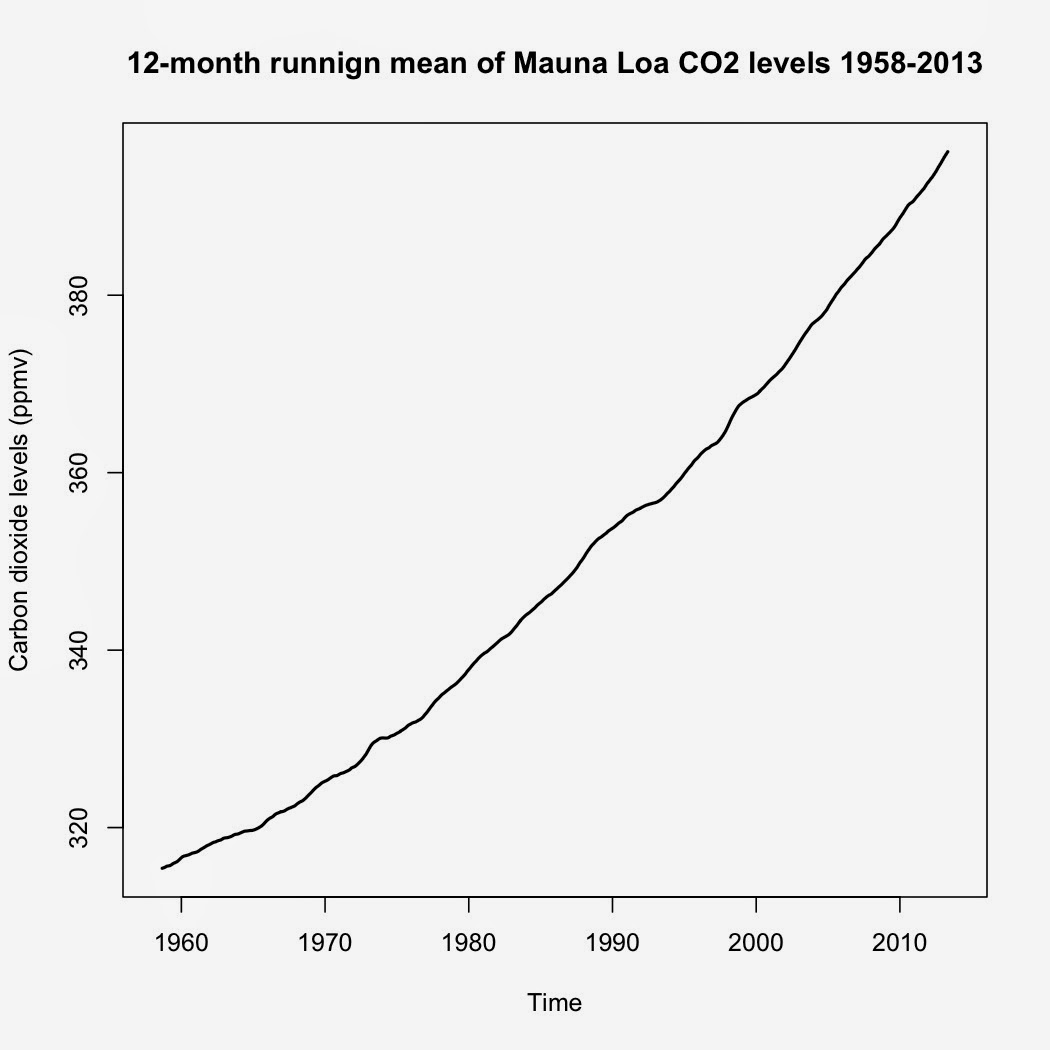 The last time the Earth had a 15-year cooling trend of any kind... 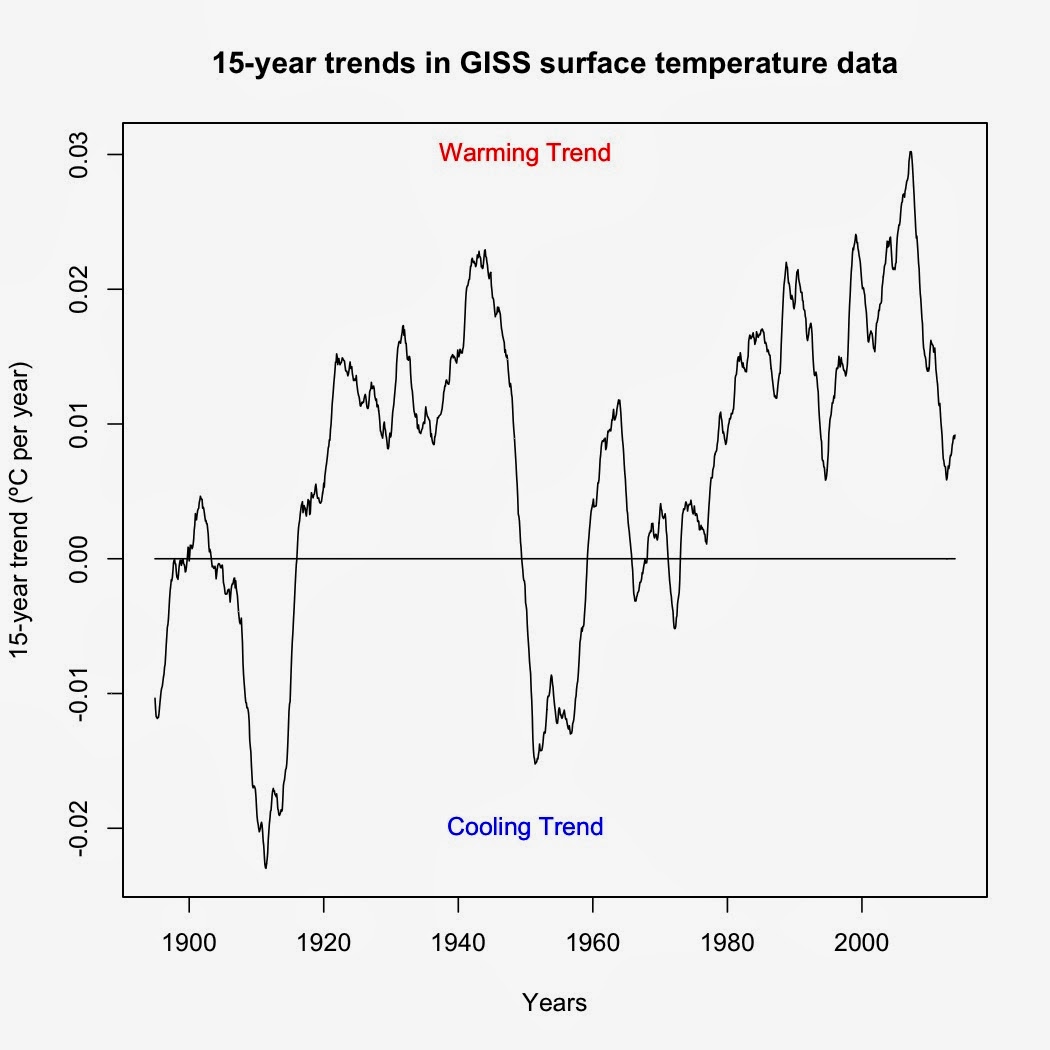 I was asked by a friend to identify the last time the Earth experienced a 15-year cooling trend.  The way I answered this was to use a rolling regression on GISS surface data (R code at the bottom).  Turns out that the last time was before I was born.  The period from February 1958-January 1973 (cooling of -0.00188ºC per decade) was the last 15-year cooling trend in GISS surface data.  Every 15-year period since has shown a warming trend of some magnitude—and yes, that even includes trends starting in 1998.   Figure 1.  Graph of temperature trends over each 15-year period.  Each point represents the trend over the preceding 15-year period. Now as to the last time the Earth showed a statistically significant 15-year cooling trend, well, that's a bit tougher to answer.  The code I'm using cannot account for autocorrelation, which means that it is biased toward showing significant time series trends when in reality the trends are not significant.  The original code also di
4 comments
Read more 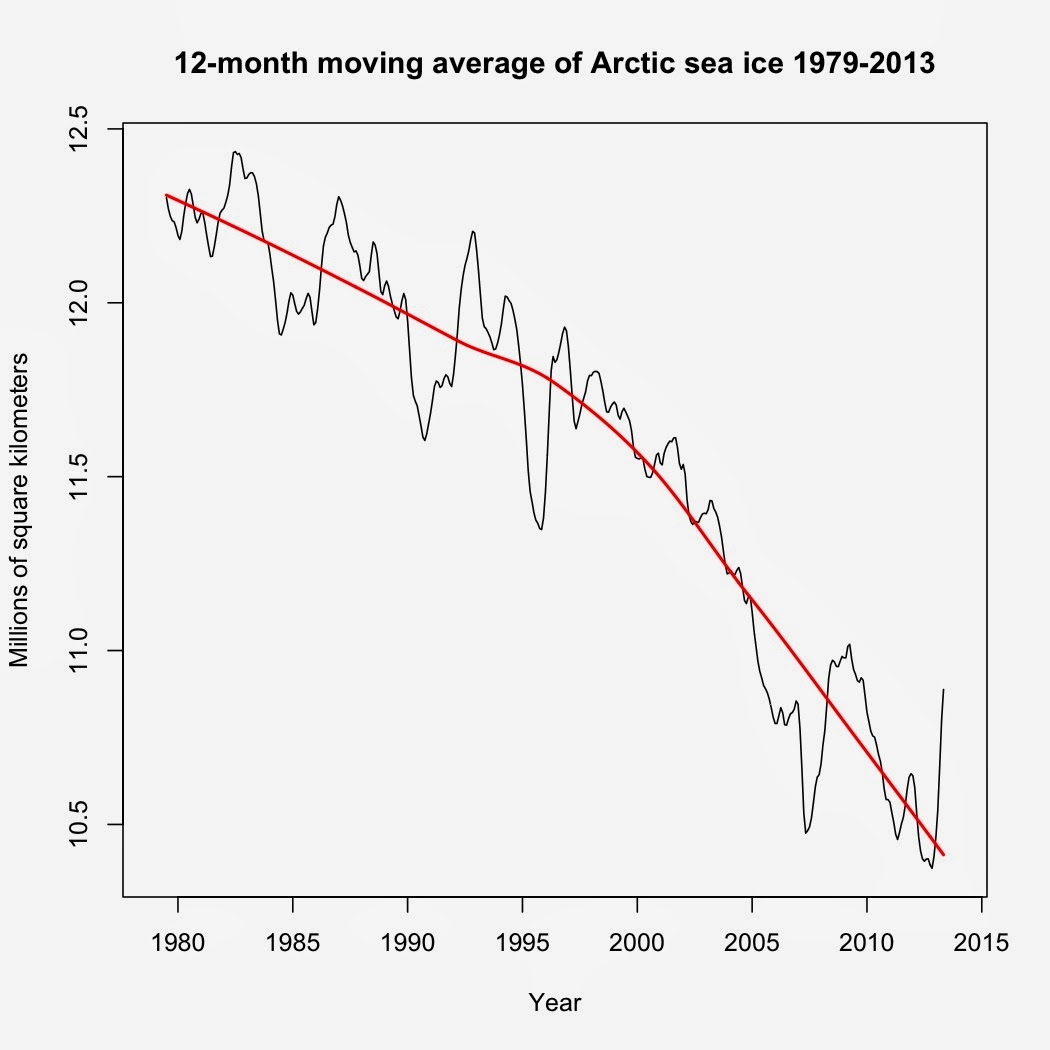 A childhood acquaintance on Facebook posted a link to a CBN News article that serves as a good example of what is wrong with conservative news media.  Written by Dale Hurd, it is a mash-up of science denier canards with little in the way of actual science or evidence. The first paragraph sets the tone, making fun of the scientists who were trapped in Antarctic ice.  Nowhere does Hurd mention HOW the scientists were trapped: A storm packed sea ice into the bay their ship was in.  Now this can happen at any time of the year but it doesn't mean that the ice is growing.  It's summer down in Antarctica, a time when Antarctic sea ice melts from ~19 million km 2 in September down to ~2-3 million km 2 by March.  That leaves plenty of broken pack ice for winds to blow around, especially in the early part of the melt season such as December when the ship was trapped.  So the irony is that those scientists were trapped by MELTING sea ice, an irony completely lost on Hurd. Hurd'
3 comments
Read more

I've had several people to use the current cold weather in the US as "proof" that global warming isn't happening. Unfortunately for those arguments, they're pure bunk. First, the Eastern US and Canada do not represent the entire planet. The December 2013 global map of average temperature anomalies show this: While the eastern US and Canada are cold, the rest of the planet is relatively warm, with only a few areas (e.g. the Middle East) colder than the 1951-1980 average.  This same pattern has been in place since November 2013 and I expect that the January 2014 map won't change much.   [As expected, it did not.  Here's the January 2014 map:] Again, the Eastern US was far below average whereas the rest of the planet, especially much of the Arctic was far above average.]  This demonstrates the importance of looking at the global temperature data, rather than just the weather in your backyard when contemplating global warming. Second, th
Post a Comment
Read more
More posts