Showing posts from March, 2014
Show all

The danger of anecdotal evidence

March 31, 2014
Anecdotal evidence is one of the most common forms of evidence.  We encounter it frequently in life, from those stories about the relative who tried some new cure to reports of children developing autism after receiving vaccines to stories on Fox News about how some snowstorm somehow disproves global warming.  However common, anecdotal evidence is the worst and most misleading form of evidence.
Post a Comment
Read more

Another denier trying to baffle with BS

On Huffington Post, I was challenged by a denier going by the screen name "Shuman the Human".  You can read the exchange here .  It's incomplete as for some reason my attempts to reply to his comment keep getting zapped.  Update: Looks like HuffPost zapped his last comment as well.
2 comments
Read more

Yet another invasive insect.

I've written before about the impact of the Emerald Ash Borer on forests in southwestern Ohio.  My introduction to the pest I'm profiling this time came last summer when I found my tomato, pumpkin, cucumber, acorn squash, watermelon, and summer squash vines infested with a strange brown bug with an oddly shaped abdomen: Halyomorpha halys (Stål), the brown mamorated stink bug. Picture from http://www.stopbmsb.org/stopBMSB/assets/Image/BMSB-on-bark-istock350w.png
Post a Comment
Read more 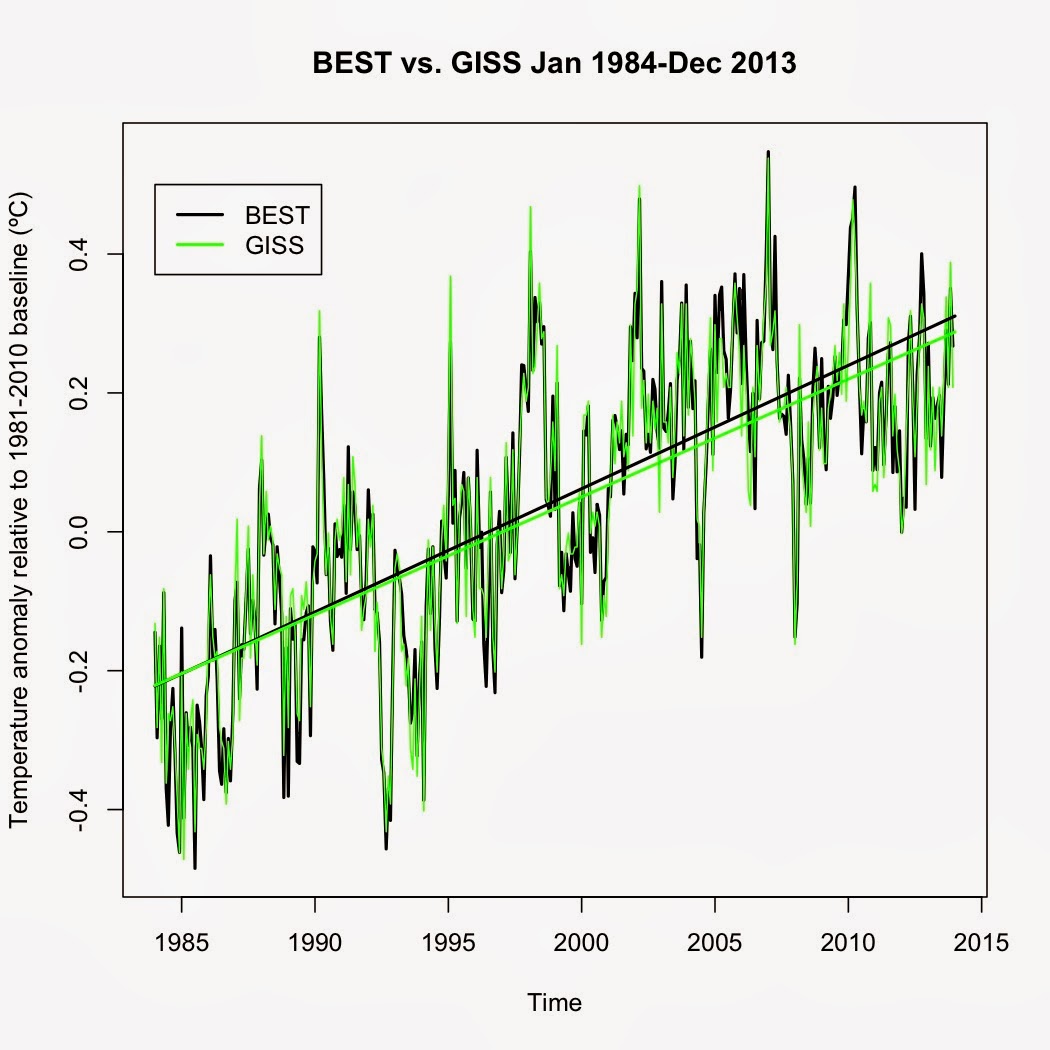 The Berkeley Earth team released a new temperature analysis that includes both land and ocean surface temperatures .  They used their existing land data and merged it with HadSST data (note: not HadSST3 as I originally wrote), using kriging to interpolate temperatures where data did not directly exist.  In this, their methodology is similar to the recent Cowtan and Way ( 2013 ) paper, however, Cowtan and Way used HadSST3 for their ocean data.  I've compared their new results over the past 30 years (Jan 1984-Dec 2013) to GISS, HadCRUT4, NCDC, UAH, and Cowtan and Way's results, first standardizing all temperature anomalies to the 1981-2010 baseline.  Why the past 30 years?  Thirty years is generally considered the standard time period for measuring climate.  All trends mentioned in this article are calculated using linear regression corrected for autocorrelation.
Post a Comment
Read more
More posts