August 21, 2014
I published a prediction of Arctic sea ice extent on July 1 that was based on September sea ice extent from 1979 to 2013.  That model yielded a prediction that the average extent for September 2014 would be 4.135 million square kilometers.  However, that model does not take into consideration any other information we have on Arctic sea ice, such as the ice extent in previous months of the year.  It just gives the general trend of sea ice in September from year to year.  You cannot use it to predict ice extent based on current ice extent or conditions.

Given that limitation, I decided to build a regression model predicting average extent in September based on the average extents between March and August.  I quickly ran into a major problem: colinearity between months.  So instead of building one grand model, I was forced to build separate models for each predictor month.  Without further ado, here are the top three models based on R2 value:


I also tested models for March, April, and May but found that predictive ability decreased rather dramatically. For instance, the R2 value for the May/September regression was only 0.3878, nearly half of that for June. 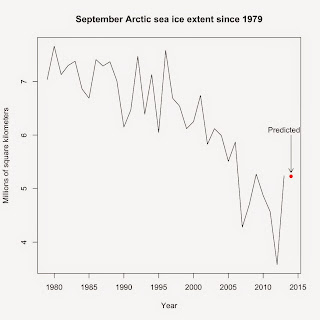