A pause in global warming? What pause?!?

December 19, 2013
Much has been made of the pause in global surface temperatures since 1998.  Among the factors advanced to explain that pause include a change in ENSO, a decline in solar output, and an increase in aerosols (i.e. Foster and Rahmstorf 2011).  One of the previously neglected factors is artificial cooling in global surface temperature data sets.  Neither the HadCRUT4 nor the NOAA temperature data cover the polar regions.  As the polar regions are the fastest warming areas on Earth (UAH Arctic trend since November 1978: +0.44ºC per decade, Global trend: +0.14ºC per decade), excluding those regions leads to an artificial cooling bias in the data. 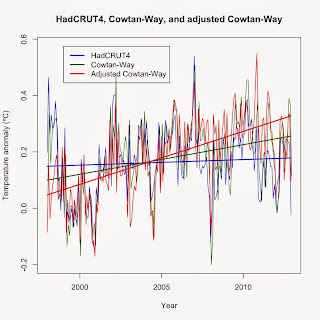 What does this mean for the "pause"?  Quite simply, there really is no pause.  The apparent "pause" is really just an artifact—the artificial effect of poor coverage of polar regions, combined with cooling from a shift in ENSO, an increase in aerosols, and a decrease in solar output.  While the rate of increase in the has been slower since 1998, an increase of +0.10508 ± 0.05458ºC per decade still an increase, not a pause.  Once the data is adjusted for ENSO, aerosols, and solar output, the rate of rise due to greenhouse gases for the Jan. 1998-Dec. 2012 is +0.1880 ± 0.02765ºC per decade—which is slightly faster than the overall rate of rise due to greenhouse gases since 1979 (+0.1841 ± 0.010282ºC per decade).  The other thing this shows is the over-sized effect small changes can have on short-term trends, as small changes in temperature can produce very different trends.  This effect is the consequence (and danger) of using short time periods.  Trends become far more stable over as the length of the time period increases.

The next time someone talks about a "pause" in global temperatures, the proper response is really "What pause?"  Global warming hasn't paused.  If anything, the rate of warming due to greenhouse gas concentrations has increased slightly since 1998.
Cowtan and Way 2013 Global warming global warming stopped in 1998 HadCRUT4 pause