For Taylor's relative humidity finding, he linked to a Friends of Science (FoS) graph.  Friends of Science is an oil-funded astroturf group run by Ken Gregory and is filled with various science denier myths (e.g. no warming since 1998) backed with an artfully drawn graph that show a completely flat trend line since 1996.  Edit: I found out that they used RSS data, which was panned by none other than Roy Spencer back in 2011 for showing false cooling due to increased orbital decay.  The fact that FoS tries to pass RSS off as reliable three years later says much about their brand of "science.").

Back to Gregory's relative humidity graph as Taylor cited it.  As Gregory states in his 2013 report, the data comes from the NCEP Reanalysis I, which is the only such dataset that starts in 1948.  That is important, as one of the main limitations in the NCEP Reanalysis I is the radiosonde data it is based upon was not homogenized before 1973 (Elliot and Gaffen 1991).  Homogenization removes non-climatic factors such as changes in location and instrumentation from the data set.  Without homogenization, you get false trends in the data.  In the case of relative and specific humidity data, changes in radiosonde instruments would change measured humidity.  This effectively means that means any comparison between data before 1973 and data after 1973 is invalid.  Yet that is precisely what Gregory did in his graph.  Even better?  Gregory omitted the 1000 mb (near the Earth's surface) pressure level, showing only the mid-tropospheric (700 mb) on up to the stratosphere (300 mb).  Most of the atmosphere's moisture is found in the lower troposphere, not the upper.  Let's correct Gregory's errors. 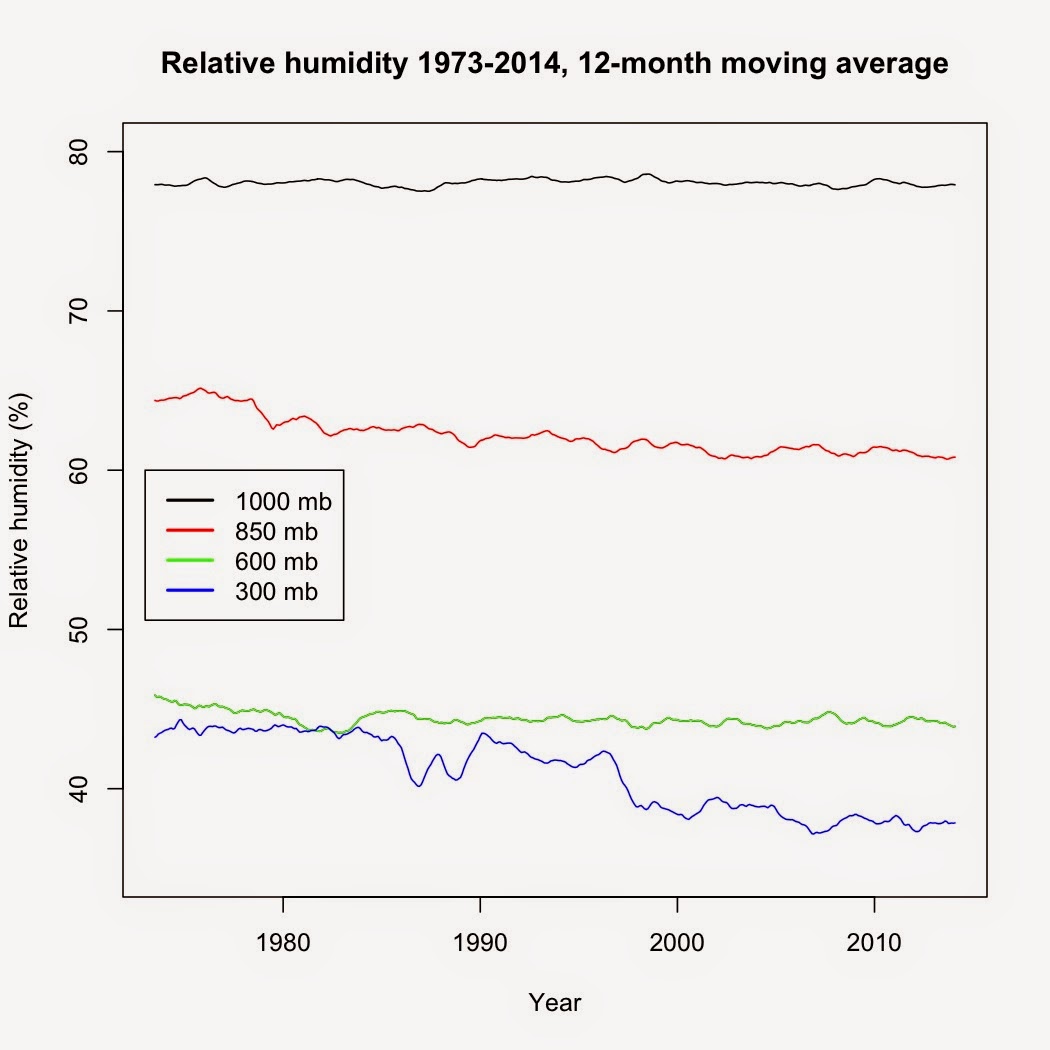 Those trends Gregory found are far less impressive when using just homogenized data.  Is it any wonder he wanted to include data that included false trends?  Relative humidity has noticeably decreased for the top of the troposphere (300 mb), which is where the atmosphere is cooling.  Other than that, relative humidity has stayed pretty much constant since 1973.  That decline visible at the 850 mb level?  It's on the order of -0.88% per decade, which is hardly worth noting.  There's also evidence that NCEP Reanalysis I underestimates the humidity of the troposphere (Dessler and Davis 2010), resulting in false negative trends.  In short, the assumption that relative humidity will remain constant is a good assumption, no matter how badly Taylor and Gregory wish it wasn't.


That statement about limitations is found right on the main page of the NVAP website.  You won't find any mention of that key limitation anywhere in Gregory's report.  I highly doubt Taylor bothered to check that such a limitation exists.  Yet its existence eviscerates the entire premise behind Gregory's report.

Gregory's report is also questionable in light of the peer-reviewed literature.  Dessler and Davis (2010) found that reanalysis programs that included satellite data as well as radiosonde data generally found that specific humidity had increased in the upper troposphere.

Chung et al. (2014) combined radiosonde and satellite measurements to show that specific humidity in the upper troposphere had increased since 1979 (the start of the satellite record) and that the increase could not be explained by natural variation.

Bottom line?  Gregory's opening sentence which stated his conclusion ("An analysis of NASA satellite data shows that water vapor, the most important greenhouse gas, has declined in the upper atmosphere causing a cooling effect that is 16 times greater than the warming effect from man-made greenhouse gas emissions during the period 1990 to 2001.") is utterly wrong.  Even if there had been a drop, it wouldn't have the size of the effect that Gregory claimed.  Solomon et al. (2010) showed that a drop in stratospheric water vapor, which is even higher in the atmosphere than the top of the troposphere, slowed the rate of temperature rise by only 25% compared to that expected from greenhouse gases alone.  The size of the effect is nowhere near the "16 times greater" that Gregory claimed, certainly not enough to stop global warming.

In short, Taylor based his main premise on a single non-peer-reviewed report from an oil-supported astroturf group, a report that is factually false.  The remainder of his article is just a repetition of science denier canards, many of which I've covered in this blog before, and most of which merely demonstrate that Taylor has an abysmal grasp of climate science.
absolute humidity atmosphere Global warming relative humidity water vapor