One of the first questions...

May 31, 2013
First, an introduction.  This blog will cover topics in ecology and environmental science.  That is, after all, my background.  I hold Bachelor's and Master's degrees in Biology, with emphasis on ecology, and am completing a Ph.D. in Environmental Science.  My research focus covers forest ecology but my training runs the gamut from calculating the spread and fate of pollutants in groundwater to creating watershed models to population ecology to ecosystem cycles.  My teaching experience is on the college level, having taught courses ranging from general biology to physiology to ecology, environmental science, and evolution.

One of the first questions I'm usually asked when people find out my background is "Is global warming real?"  My answer is "Yes, it's real–and it's caused by humans."  In this post, I'll explore the data that shows that the Earth is warming.  I'll get into the data why we're the cause in subsequent posts.

First, my tools.  I used R for my statistical analysis.  For the data, I used four global atmospheric temperature datasets:

GISS, HadCRUT4, and NCDC are based on weather station data.  UAH is based on satellite measurements.  All four are given as temperature anomalies, which just means that a baseline has been subtracted out.  For GISS, the baseline is the temperature average from 1951-1980.  For HadCRUT4, it's the average from 1961-1990.  NCDC's baseline is the average of the entire 20th century.  UAH uses 1981-2010.  Converting from raw data to anomalies allows us to see at a glance whether global average temperatures are above or below the baseline but does not change anything else about the data–the trends remain the same, etc.

Here's the atmospheric temperature anomaly data from January 1880 to 2012: 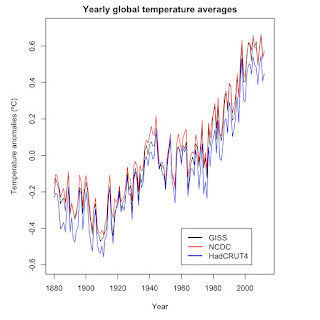 As you can see, there's not much disagreement between the datasets.  That agreement is even more apparent when I adjust the three datasets to the same 1961-1990 baseline: 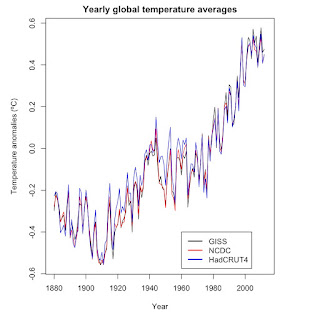 As you can see, the weather station-based datasets are pretty much the same and in agreement that the planet has warmed.  Taking just the data since 1979, adjusting the data to the UAH baseline, and adding UAH into the mix gives us this: 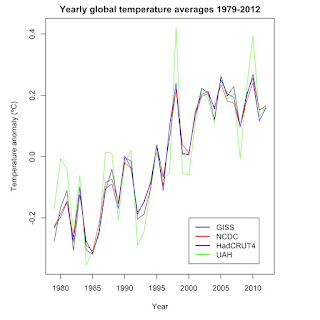 While the satellite record is more variable than the weather station-based data, it's in good agreement with the weather station records.  The average rate of rise between 1979 and 2012 is statistically the same between all four datasets, with the rates of rise virtually indistinguishable as 95% confidence intervals:

There's no doubt that the atmosphere has warmed since 1880.  We can get even further back in time using tree cores, sediment cores, ice cores, and stalagmites, as have been done in multiple recent studies:

Despite being done with different data by different teams of scientists, all those studies agree on one thing: The Earth is warming rapidly, with that warming trend starting in the 20th century.
Climate change GISS global temperatures HadCRUT4 NCDC UAH