How we know global warming will continue

June 09, 2013
Since global surface and atmospheric temperatures have flatlined over the past 7 years (see graph of UAH temperatures below), there's some noise over whether or not global warming has stopped.

There are three lines of evidence that show us that global warming will continue for the foreseeable future and that this flatlining is only a temporary pause in surface warming only.  The first is the energy balance of the planet: Energy in vs Energy out.  As shown by the Stefan-Boltzmann equation, Energy in is determined by the amount of solar energy that hits the Earth minus the amount that reflected due to albedo.  Energy out is determined by emissivity, which itself is determined by greenhouse gases.

Why does the energy imbalance matter?  The laws of thermodynamics mandate that if an object shows a net gain of energy, its heat content (and thereby temperature) must increase.  Unless the laws of thermodynamics do not apply to the Earth, global warming will continue until Energy in = Energy out.  We can use the equilibrium climate sensitivity equation to calculate how much global surface temperatures will have to rise before the energy balances.

ΔT = λΔF.
Using the above information, we can calculate that ΔT = 0.809ºC/W/m2 * 0.75 W/m2 = 0.61ºC.  Global warming will continue until we've warmed up by another 0.61ºC (1.1ºF).  That's the amount of further warming we're locked into by today's greenhouse gas concentrations no matter what we do.  And that would be the total future warming IF we stopped emitting greenhouse gases today.  Future reductions in greenhouse gas emissions will only affect how much above that amount of warming we go and how quickly future warming will be.

The only question, really, is where the extra heat is going right now.  It's not currently going into the atmosphere, as the loess trend in atmospheric temperatures have leveled off over the past 7 years, as I noted in my last post.  However, the atmosphere is only part of the total climate system where heat can accumulate and a small part at that.  The other parts that absorb heat?  The oceans, glaciers and polar ice caps, and the land itself.  The total heat content of the Earth is the other line of evidence.

Looking at measurements of total heat, we see that total heat accumulation has not stopped at all (Murphy et al. 2009; Nuccitelli et al. 2012).

We also see that most of the heat (>90%) has been absorbed by the oceans.  Ocean heat accumulation has continued unabated since 1999, with more heat going into the deep oceans (Balmaseda et al. 2013; Guemas et al. 2013).

As a result, you'd expect the oceans to have warmed whereas the atmosphere should have cooled over the past 7 years.  And that's pretty much what has happened.  Does that mean that global warming has stopped and that we'll be cooling?  Not by a long shot.  Eventually, all that extra stored heat in the oceans will make its way into the atmosphere, accelerating warming in the atmosphere.

The final line of evidence comes to us via statistics.  We can use multiple regression to estimate the impact of the solar cycle, the El Niño/La Niña cycle, and volcanic eruptions on surface and atmospheric temperatures and then factor them out of the temperature record.  The result then shows global surface and atmospheric temperatures without those factors.  Foster and Rahmstorf (2011) did just that for the RSS, HadCRUT3, GISS, UAH, and NCDC temperature datasets.  Their results show that warming didn't even slow down over the past decade.
For those who want to replicate their work, Foster and Rahmstorf made their R code available here.  I ran their code on GISS from 1979 to March 2013 (the latest date for which solar output data is available).  Here is my result, with a loess smooth to highlight the trend: 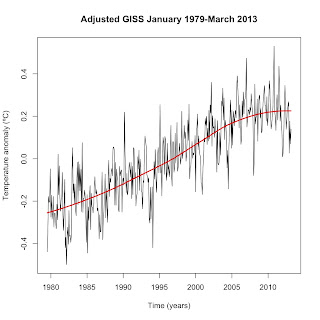 A couple of notes.  First, I used monthly data for my graph whereas Foster and Rahmstorf calculated the yearly averages, so my graph is messier.  Second, I used the adjusted GISS to calculate the linear regression trend, corrected for autocorrelation, since 1998 and compare it to the trend from unadjusted data.  The result?


In short, the combination of El Niño/La Niña, the decline in the solar cycle, and changes in aerosols since 1998 has been enough to mask most of the actual warming trend.  Otherwise, we would have experienced strong warming over the past 15 years.