Monckton, RSS, and no warming since September 1996

February 28, 2014
While browsing a climate change article on Huffington Post, I noticed a global warming denier using a Watts Up With That post by Lord Monckton as "evidence" that global temperatures haven't changed since September 1996.  In it, Monckton uses least squares regression to show that satellite data from RSS is flat (trend: -0.0001394ºC per year) between September 1996 and January 2014.


Monckton then interprets the data to show no global warming in 17 years 5 months.  And he's correct—IF you ignore what we know about RSS AND you ignore the other temperature data sets.  The problem is what he ignores.

First off, back in July 2011 none other than Roy Spencer noted that RSS shows false cooling since AD 2000.  The problem is that the satellites the RSS team uses have run out of fuel and cannot maintain stable orbits.  This introduces a false cooling into the data, as the satellite data is based on measuring the same part of the Earth at the same time each day.  If the satellites measure slightly different areas at a given time, this daily (diurnal) drift will bias the data.  Every satellite data set has some false cooling due to diurnal drift and each team attempts to correct for that drift to factor it out.  The problem is that the RSS satellites are drifting faster than the computer algorithms expect them to be, meaning that not all of the drift is factored out—and therefore the RSS temperature estimate is biased low.  This by itself invalidates Monckton's claim, as he uses a dataset that shows false cooling.

Second, RSS is the only dataset to show no warming since September 1996.  The rest all show various degrees of warming—even UAH satellite data compiled by Roy Spencer and John Christy.  As always, I'm correcting for autocorrelation with ARMA to get the correct p-values. 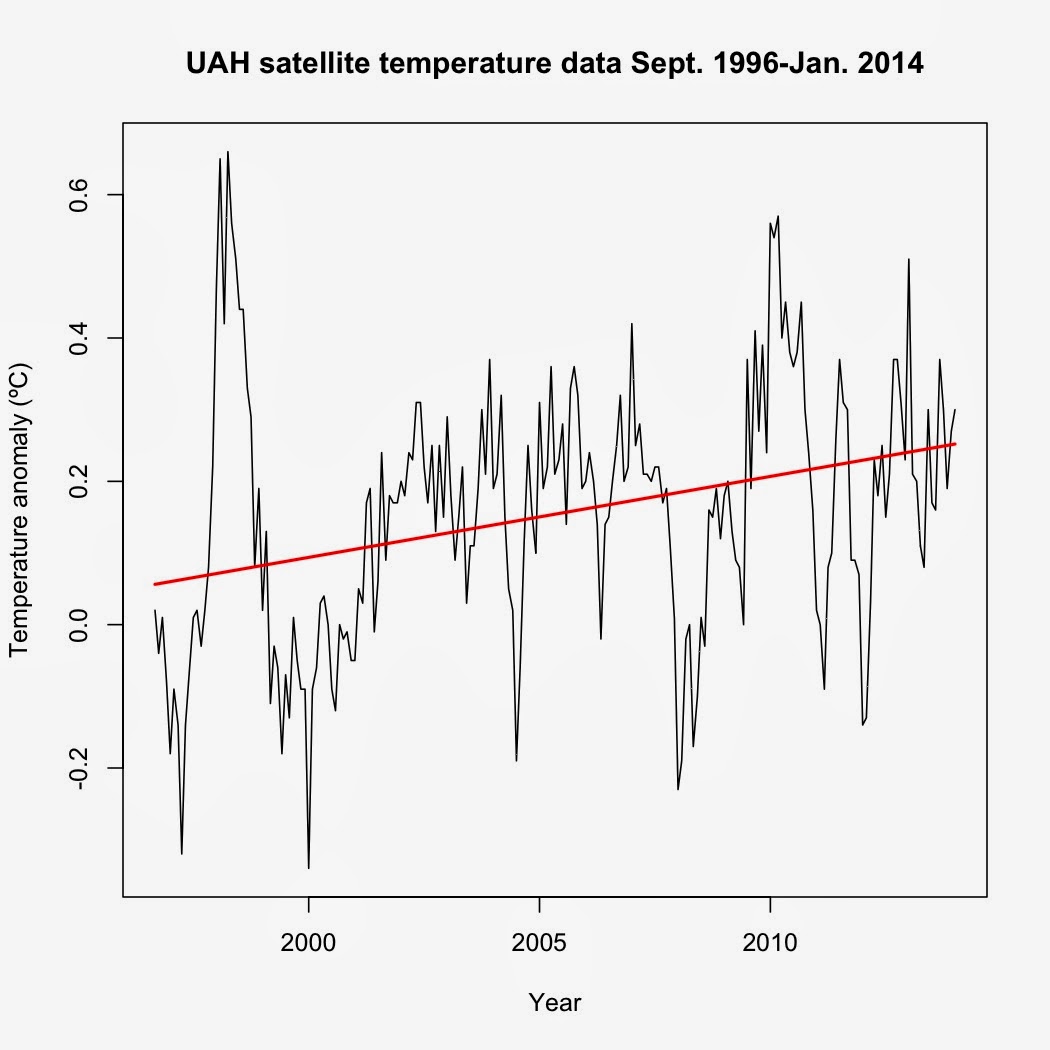 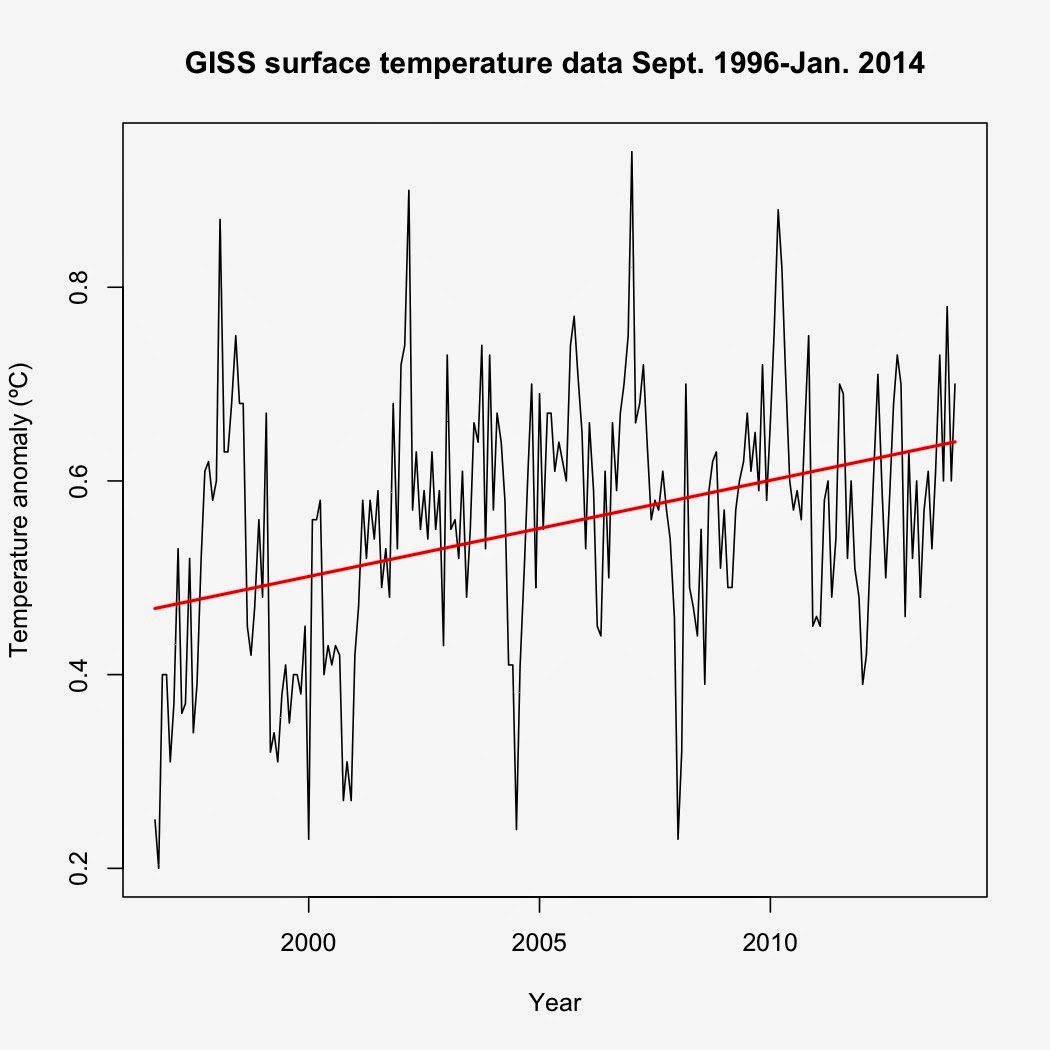 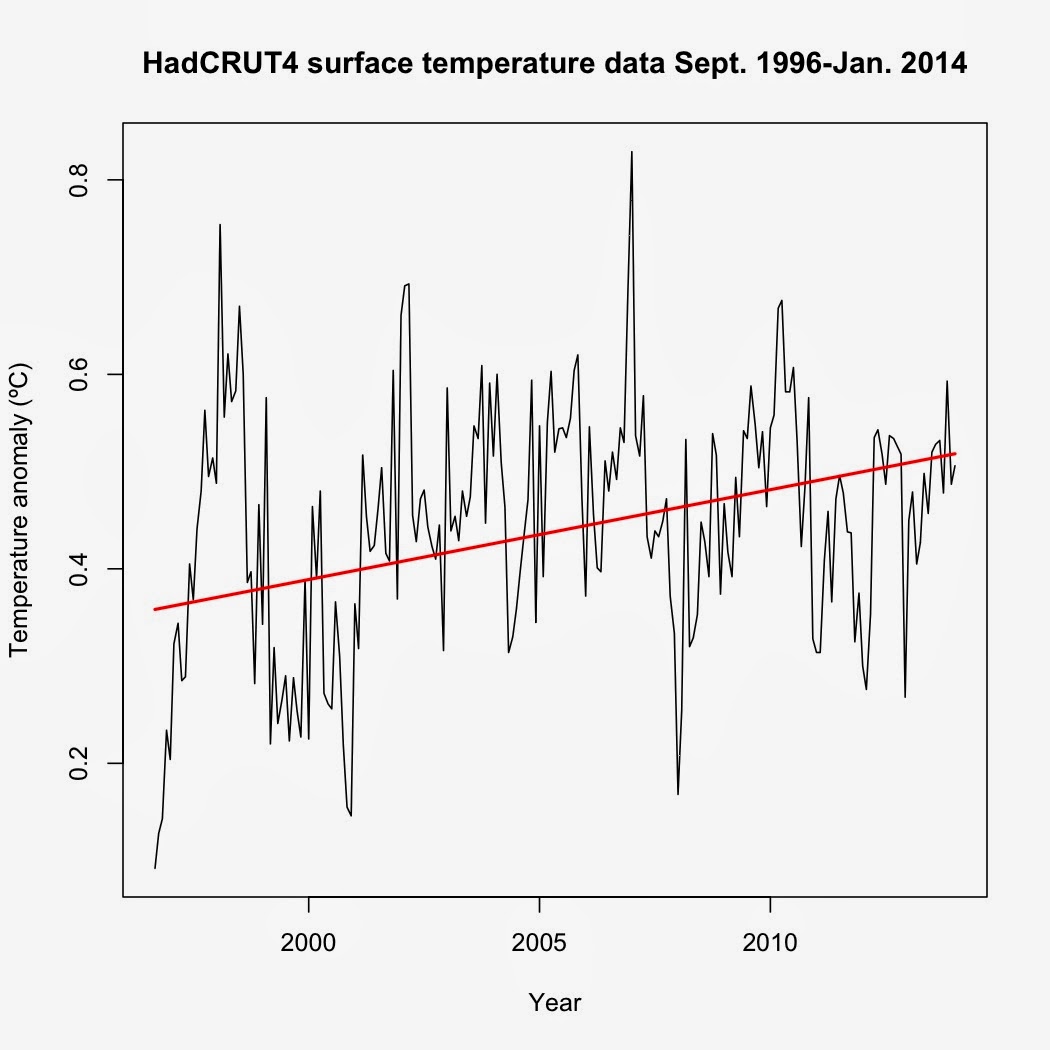 I'll add NOAA data and the new Cowtan-Way coverage corrected HadCRUT4 when I get the updated data but I think it's obvious why Monckton choose RSS despite its known false cooling.  If he'd chosen any other satellite or surface dataset, it wouldn't have fit his argument as the warming is obvious.  Since he didn't correct for autocorrelation, his analysis would have shown that all of the trends were statistically significant.  Monckton's argument is an blatant example of cherry-picking.  He deliberately cherry-picked a dataset and then cherry-picked his start point to get the answer he wanted.

Despite all this, Monckton's analysis and interpretation was lapped up uncritically by the denizens of WUWT.  Monckton's post is a prime example of the blatant, deliberate misinformation peddled on that site as well as a sample of the type of unthinking readers WUWT attracts.  And none of it reflects well on Watts.
Global warming Monckton no warming RSS WUWT