June 30, 2014
for GOP politicians to be completely ignorant of science?  You have Phil Broun, a former physician who called evolution, embryology, and the Big Bang "lies straight from the pit of Hell."  It's enough to make one wonder how he reacted to bacteria who have evolved antibiotic resistance and/or cared for any potentially pregnant patients, given that an understanding of embryology is rather integral to caring for such patients.  Then there's Ralph Hall, who claimed that climate scientists are essentially committing fraud for grant money, Dana Rohrabacher once claiming that dinosaur farts caused climate cycles in the past, and Phil Gingrey's claims that women's bodies can resist pregnancy arising from rape because a woman's body shuts down ovulation if she is stressed out.  Gingrey is a former OB/GYN.  Who believes that a woman's body can magically shut down its reproductive system if subjected to the stress of being raped....  My irony meter just broke.  Now get ready to add one more science illiterate to the GOP circus.

Lenar Whitney, a Republican state representative from Louisiana, claims that climate change is nothing more than a massive fraud.  Why?  First, because, according to Whitney, the planet "has done nothing but get colder each year since [An Inconvenient Truth's] release."  An Inconvenient Truth was released in 2006.  Here's what the planet has done since then: 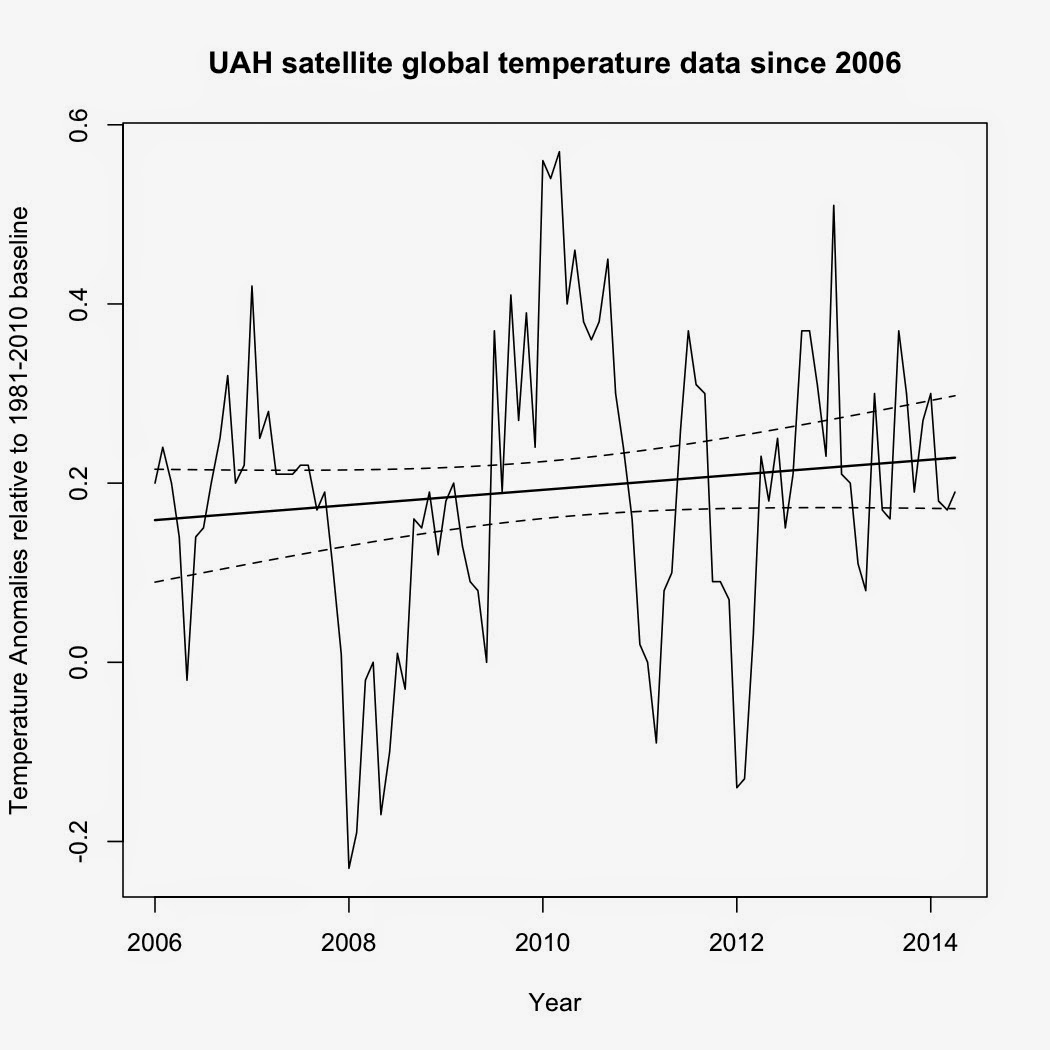 An ARMA(1,0) regression reveals that global temperature has risen slightly since 2006:

Now, it's not a statistically significant rise.  Nowhere near.  In fact, statistically, the global temperature rise since 2006 is not any different from zero—yet.  It takes at least 17 years of data to detect climate trends.  Whitney is only considering 8 years.  But even 8 years of data shows that the planet is not getting colder, as Whitney so ignorantly claimed.

Second, Whitney cites the increase in sea ice around Antarctica.  Never mind that the decline in Arctic sea ice has been greater Antarctica's gain (-1.458 million km2 versus +0.924 million km2 as measured by annual averages, -2.764 million km2 vs +0.715 million km2 as measured by the total Arctic loss in September from 1979 to 2013 versus the total Antarctic gain in March from 1979 to 2014).  Never mind that Antarctic land ice has been decreasing by an average of -71 billion metric tons of land ice per year for the past 20 years (Shepherd et al. 2012).  Never mind that Antarctic sea ice is growing in part because of the melt water flowing off the continent diluting the top layer of the Southern Ocean and making it fresher (Bintanja et al. 2013), which makes the surface of the ocean easier to freeze.  Never mind anything scientists have discovered about either the Arctic or Antarctic.  All that matters to Whitney is that somewhere, somehow, sea ice is increasing and in her simplistic view of the world, that means the world cannot be warming.

Quite frankly, the ability of Republican politicians to show rank scientific ignorance (and be proud of that ignorance) should be a national embarrassment.  At best, it allows other nations to laugh at "our" ignorance.  At worst, government policies that impact current and future generations are being based, not on reality, but on ignorance and wishful, magical thinking.  And that is a situation that no American should desire.
Antarctic sea ice Arctic sea ice global temperatures since 2006 Global warming politicians