July 03, 2014
NewsMax.com printed a poorly writen story about Antarctic sea ice intended to sow confusion amongst its readers which was unfortunately shared on my Facebook timeline by an acquaintance.  However, the article is even worse than being merely poorly written.  The "author," Sandy Fitzgerald, extensively plagiarizes a blog post by Harold Ambler while leaving out nearly everything Ambler wrote about why Antarctic sea ice is increasing.  Fitzgerald manages to make it sound like a new record extent in Antarctic sea ice somehow contradicts global warming.  Ambler's original is a far more nuanced argument.

Ambler begins by noting that the sea ice anomaly for Antarctica hit a record high on either June 26 or June 27, as shown by the Cryosphere Today website.  And yes, the daily anomaly has been generally increasing since around 2010.  However, saying that the anomaly hit a new high on any particular date is somewhat misleading.  That graph is of the daily anomaly.  It simply take the ice extent of a particular day relative to the average for that day.  Ice extent changes on a daily basis due to the actual amount of ice and how storms or prevailing winds shift the ice around, as anyone who examines the daily ice extent data for either the Arctic or Antarctic will know.  What is more meaningful is the overall trend in ice extent, not the ice extent anomaly on a particular day.

Ambler's main argument is that global daily sea ice anomalies (Arctic + Antarctic) do not show much of a decline over the past 13 years with some growth over the past 18 months.  Therefore, global warming isn't that bad, because the loss of sea ice in the Arctic is being offset by sea ice growth in the Antarctic.  Quite frankly, I'm not impressed with either his method (adding the daily anomaly for the Arctic with that of the Antarctic) or his argument.

First, he completely misses the key point that explains why the loss of the Arctic ice cap is more important to global climate than the growth in wintertime Antarctic sea ice.  The reason Antarctic sea ice is not as important to the climate system is that it forms in the polar winter and then melts almost completely during the polar spring and summer.  It's dark at the poles in the winter.  Not much solar energy to reflect back into space.  All that Antarctic sea ice?  Doesn't do much to the energy balance of the planet.  The Arctic ice cap, on the other hand, lasts throughout the polar summer.  Plenty of sunlight up at there during the summer, energy which would normally get reflected back into space.  Losing that ice cap means more energy gets absorbed by the Arctic Ocean and turned into heat.  It doesn't take a genius to figure out why the loss of the permanent Arctic ice cap is more important than a new peak in wintertime-only Antarctic sea ice.

Second, his preferred method of measuring the state of the sea ice is to simply add Arctic ice extent with Antarctic ice extent, ignoring the offset in the seasons between the poles.  Arctic sea ice reaches its winter maximum in March, its summer minimum in September.  Antarctic sea ice reaches its summer minimum in February, its winter maximum in September.  That offset means that simply adding the two masks any decline in the permanent sea ice cap, hiding it behind the temporary seasonal sea ice of the respective polar winters.  If Ambler wants to really compare apples to apples and if he really wanted to focus on the sea ice that actually impacts global climate by sticking around in the summer, he should use the extent of multiyear sea ice which is revealed by the yearly sea ice minimums for his calculations.


I rather suspect that Ambler won't like that sort of analysis, as it doesn't quite fit with his narrative.  Neither does analyzing the actual extent of sea ice at each pole (not daily anomalies) or the actual global sea ice extent.  I used a 12-month running mean to compensate for the yearly cycle along with loess trend lines to show highlight the trends. 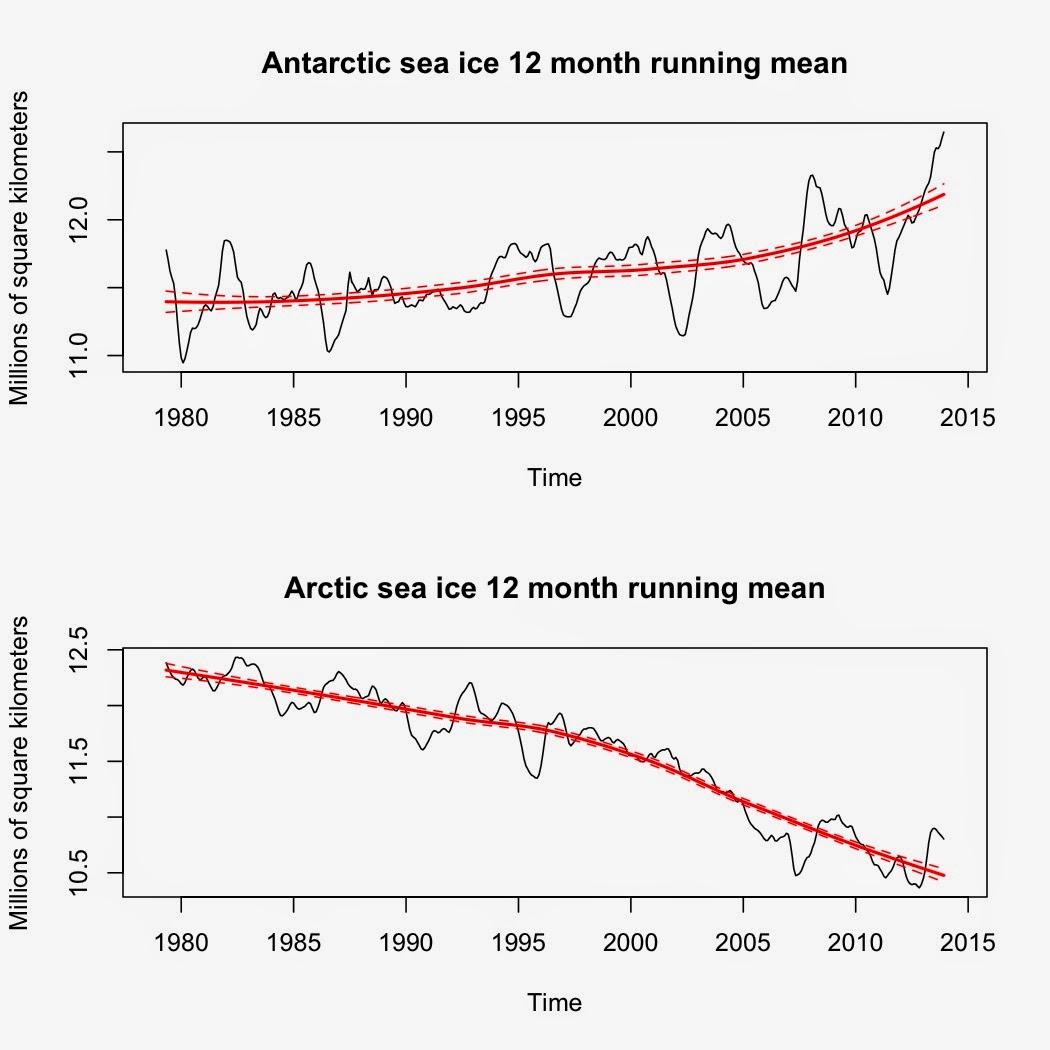 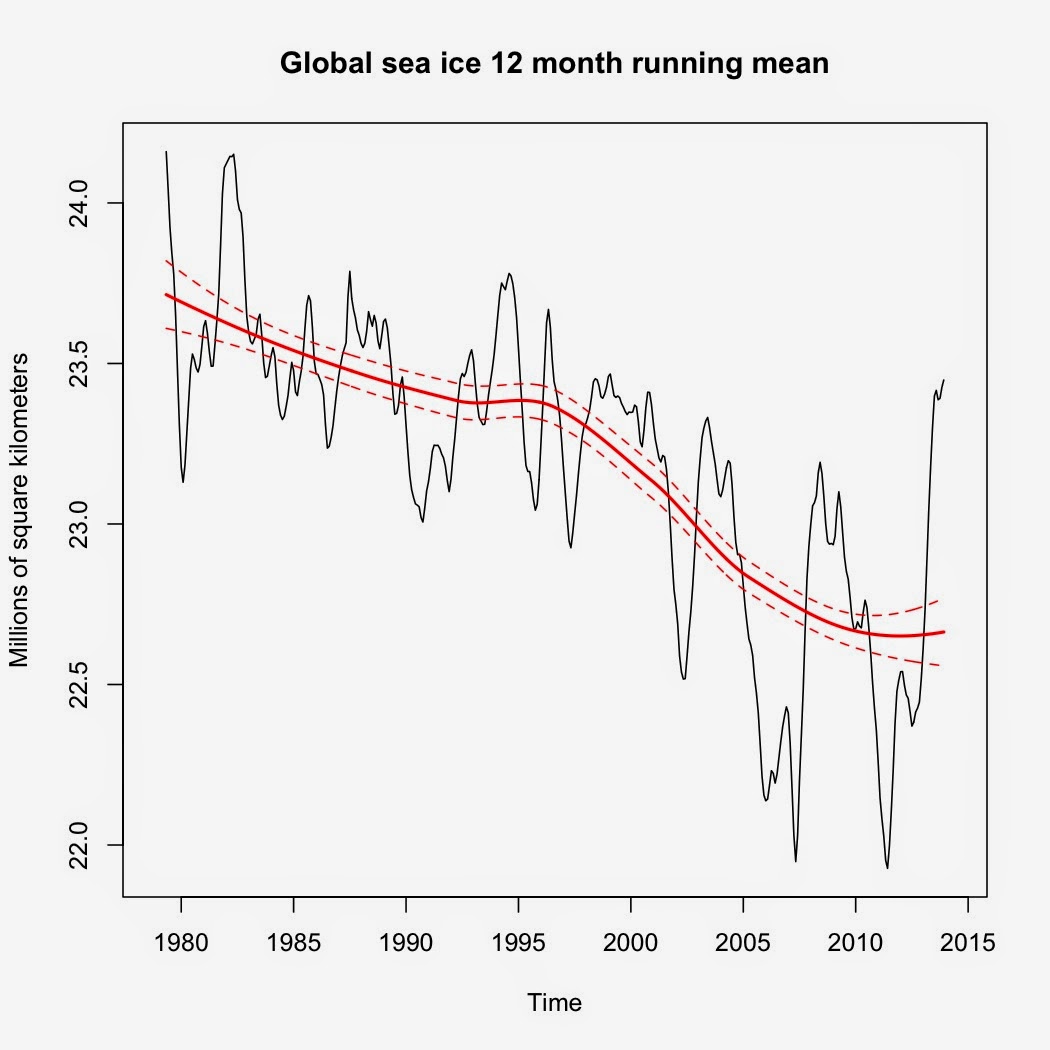 The results of analyzing the actual extent rather than daily anomalies reveal that while sea ice may have increased over the past 18 months, it hasn't been enough to change the overall trend.  That 18 month growth is based on a temporary growth in Arctic sea ice (note that the 12-month average for the Arctic has already started declining again) combined with an increased growth in Antarctic seasonal ice.

So, what do I make of his article?  He relies on short time frames, leaves out the  inconvenient fact about Antarctic continental ice, glosses over the reasons that show why the growth in Antarctic wintertime ice matters less than the loss in the permanent Arctic ice cap, and prefers a type of graph that hides the decline.  In short, other than the quotes from various climate scientists, I'm not very impressed.
Antarctic sea ice extent Arctic sea ice extent global sea ice extent Global warming multiyear sea ice