October 20, 2014
The recent paper by Johnstone and Mantua (2014) has certainly made the rounds in conservative circles.  It's popped up several times on my Facebook feed as various friends and acquaintances share articles about it.  Unfortunately, most of those articles get it wrong, usually twisting Johnstone and Mantua's findings to imply that 80% of ALL global warming is natural.  As I explained in my last post, that is a blatant misinterpretation of their paper, which only applies to the northeastern Pacific and coastal regions of the US Pacific Northwest.  Globally, natural cycles do not explain the trend in global temperatures.  How can I say that?  Do the statistics.

I used multiple regression to assess the fit between global temperatures since March 1958 (using coverage-corrected HadCRUT4 from Cowtan and Way 2014) and carbon dioxide levels, El Niño/Southern Oscillation (ENSO), the Pacific Decadal Oscillation (PDO), and the Atlantic Multidecadal Oscillation (AMO).  I converted carbon dioxide levels to radiative forcing using the formula from Myhre et al. (1998), then used a 12-month moving average on all data to eliminate seasonal cycles and reduce random noise.  I'm not interested in noise or seasonal cycles—I want only the trend.  I then used the cross-correlation function to calculate the lag between each regressor variable and global temperatures.


Table 1.  Best lag between each regressor and global temperature

That last one is not a typo—changes in global temperatures preceded changes in the AMO by 2 months rather than lagged behind as would be expected if AMO controlled global temperature.  That nasty little fact eliminates the AMO as a possible driver of global warming, relegating it to a positive feedback role at best.  The following graph shows the relationship between global temperature and the four regressors.

That's not too shabby taken at face value.  The model explains 89.27% of the variation in the global temperature data.  That was a statistically significant increase over the model with just radiative forcing (84.01%).   Models with the Pacific Decadal Oscillation included did not improve the fit over that of just radiative forcing and the El Niño/Southern Oscillation (p = 0.1318).  Using the model to predict the 12-month moving average global temperature showed a good fit compared to the observed (R2 = 0.8929).  The main areas of disagreement between the predicted and observed occurred mainly during the major volcanic eruptions (El Chichon, Mt. Pinatubo).  Not too shabby for such a simple model.

Examining the diagnostic plots for the winning model shows no major departures from the expected.  The residual plots are somewhat odd, but that is likely a consequence of using a 12-month moving average to smooth the original data. 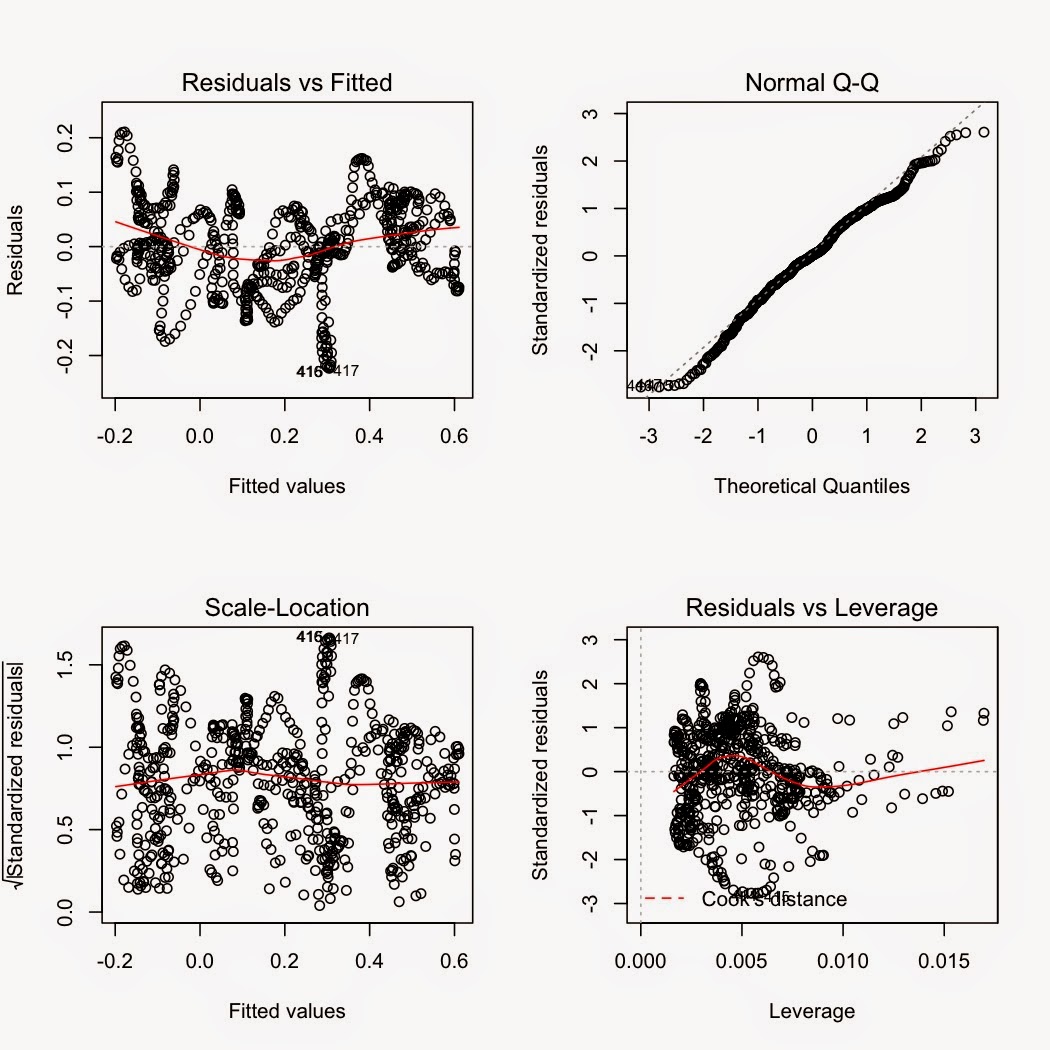 So, what does this exercise show?  You may be able to show that natural variation explains temperature trends over a region or over very short time periods—but the temperature trend for the entire globe over several decades is explained by the increase in radiative forcing, with only minor input from natural variation.  Add in the strong empirical evidence directly showing that the increase in greenhouse gases (especially carbon dioxide) is warming the planet and the case becomes overwhelming.
AMO Atlantic Multidecadal Oscillation CO2 El Niño/Southern Oscillation ENSO global temperature multiple regression Pacific Decadal Oscillation PDO radiative forcing