This report compiled all known data on species status.  The results are sobering.  Thousands of species are at risk of extinction, including:

Note: Those are the species currently at risk.  Today.  Not predicted to be at risk in the future.  Forty-one percent of all amphibians, 26% of all mammals, and 13% of all birds are already at risk of extinction today.  And those are the best known groups. The rest—insects, plants, fungi, fish, etc?  Unknown, as not enough species in those groups have been evaluated to even guess at the percentage currently at risk of extinction.

Since AD 1500, there have been 765 documented extinctions.  There are currently 5,522 species known to be threatened with extinction—and that's just among mammals, birds, amphibians, and 0.5% of known insects that have been evaluated for extinction risk.  It doesn't include fish, plants, fungi, and the estimated 4 million insects yet to be discovered. 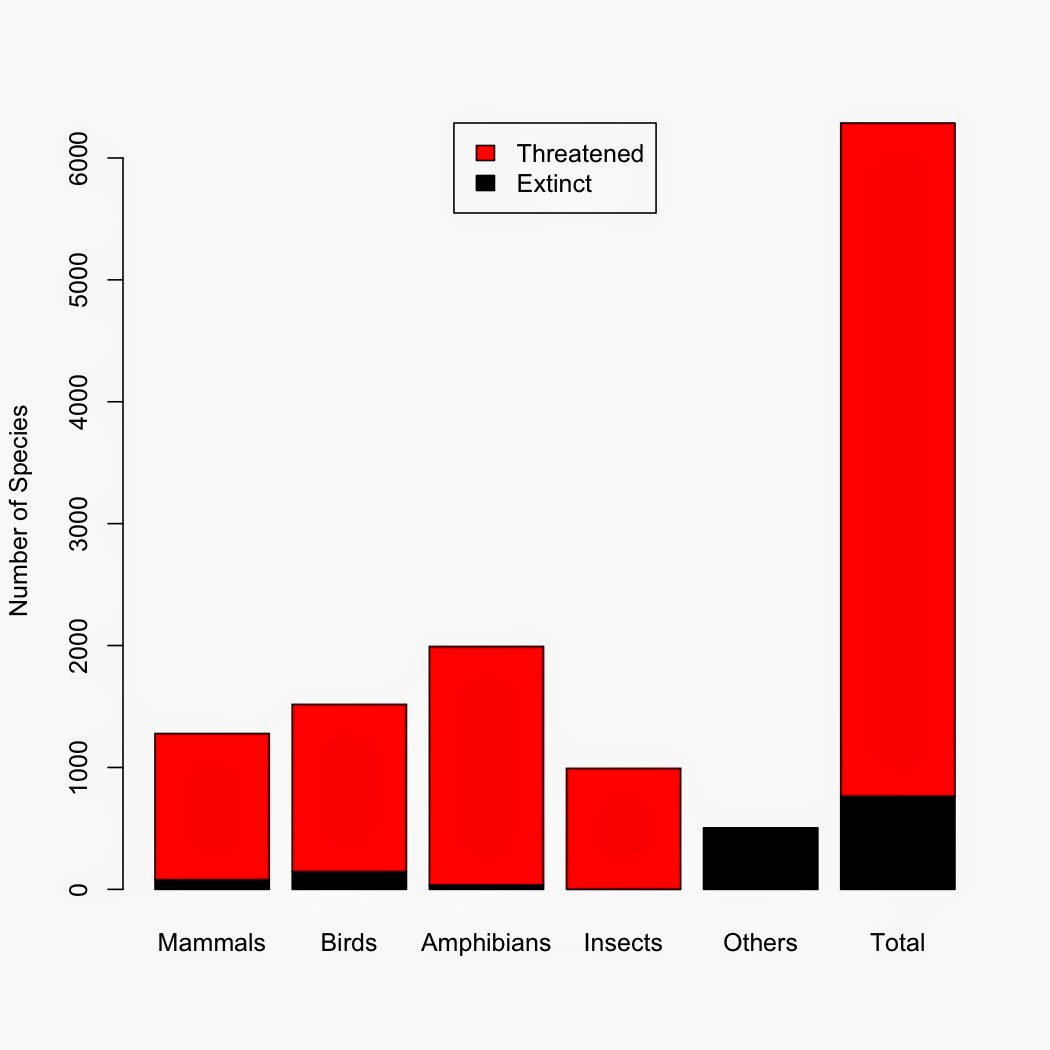 This is the heart of extinction crisis.  Yes, we've relatively few species that have gone extinct to date ("only" 765 so far).  Unfortunately, far more are currently threatened with extinction.  The list of threatened species is likely to grow both as we discover new species and as we evaluate more species for extinction risk.

So far, we've named around 1.7 million total eukaryote species.  The total number of eukaryote species has been estimated at anywhere from 8.7 million ± 1.3 million (Mora et al. 2011), although that total is hotly disputed as being too low.  One criticism is that their methodology works only for well-known groups.  Groups that are less known (for instance, fungi and most marine species) are woefully underestimated.  For example, Mora et al. estimated a total of 600,000 species of fungi.  Other studies have estimated up to 5.1 million species of fungi alone (i.e. Blackwell 2011).  Even accepting Mora et al.'s numbers as correct, it means we have only discovered ~20% of all known eukaryote species.  The other major domains of life (prokaryotes and archaea)?  We've no idea how many there are.

We've also little idea how many species are going extinct.  Right now, the estimated extinction rate ranges from 10 species per week up to 690 species per week (Monastersky 2014), largely based on the species-area relationship (MacArthur and Wilson 1967).  At the upper rate, we'll pass the threshold for a mass extinction (≥75% of all species extinct) by around AD 2300 (own calculations).

What does that have to do with us today?  Most species on the threatened list are there due to hunting, fishing, and other forms of exploitation, habitat degradation and loss, invasive species, pollution, and disease.  Those threats are all due to human activity, either through direct exploitation (i.e. bushmeat trade, exotic animal trade, etc) or through our way of life (pollution, habitat loss/degradation).  The elephant in the room is climate change.  Depending on the rate of warming, far more species will be landing on the threatened lists due to climate change in the future, as multiple studies have already made clear. 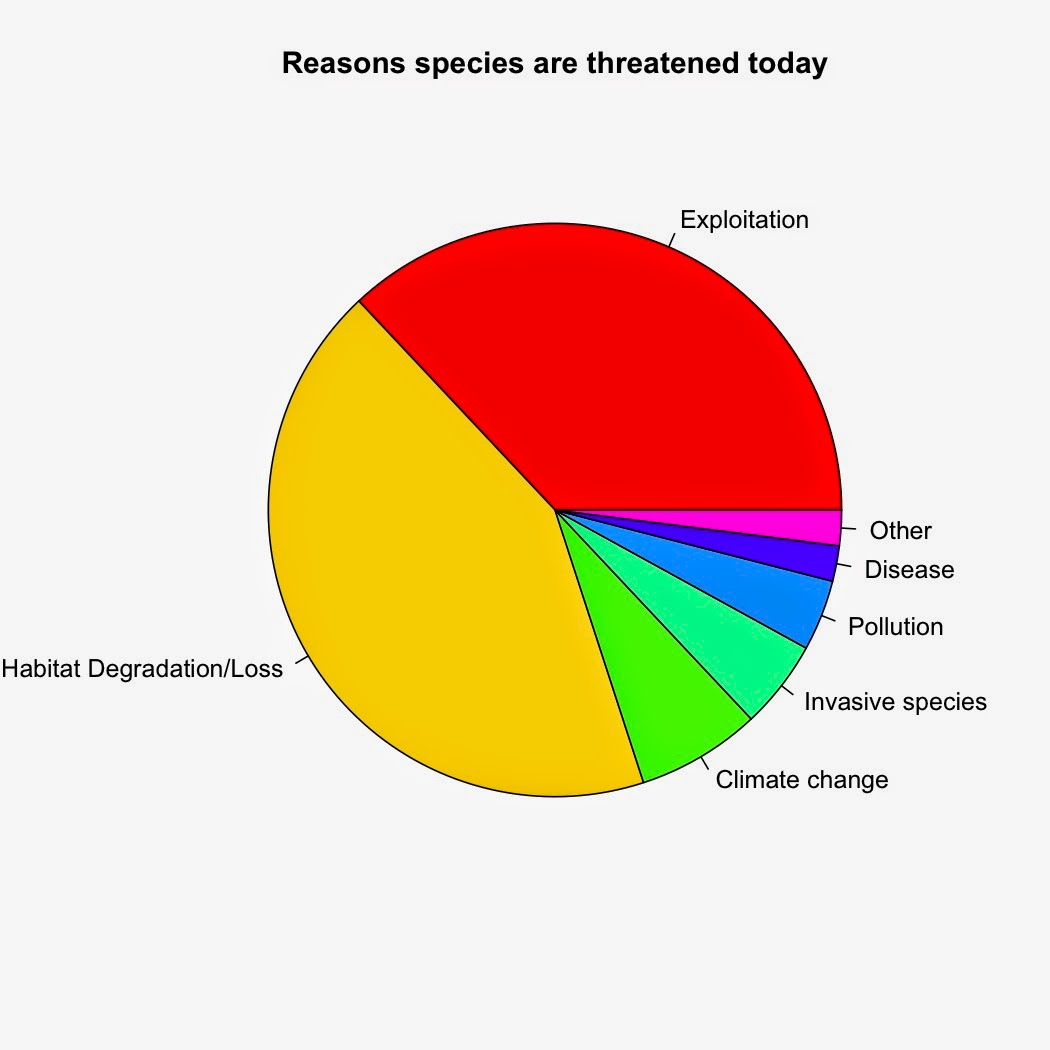 The other point of emphasis I'd like to make is that every single one of these impacts have cumulative effects.  The individual events (i.e. spearing one shark, shooting one bird, clearcutting one plot of forest) may not be large but across time and many individual events, the total effects can be devastating, as the extinction of the passenger pigeon made clear 100 years ago, the extinction of the northern black rhino made clear in 2011, and the recent news that there are now only five northern white rhinos left in the world made clear this year.  Because of the cumulative effects, the sooner we begin efforts to counteract those negative impacts, the better it will be for all species involved.

The time for individual and collective action to avoid leaving our children and grandchildren an impoverished planet is now, when we're at the cusp of an extinction event, not 100 or 200 years from now when we're in the middle of the event.  For that to happen, our business and political leaders must look beyond the next quarterly earnings report and beyond the next election to take long-term action.  I'm not holding my breath in expectation.
biodiversity Climate change extinction extinction crisis mass extinction