The non-existant pause in global temperatures

December 20, 2014
Regular readers of this blog will know that I am skeptical of claims that global warming in atmospheric temperatures have paused since 1998, having written several posts questioning the existence of such a pause.  In this edition, I'll run down the main evidence that, in my opinion, show that the pause is a figment of the denialsphere's imagination.

1. The trend since 1998 is statistically indistinguishable from trends using other start points.

Here is the trend since 1998 compared to the trends starting from 1970, 1980, 1990, and 2000 for GISS, Berkeley Earth, and the Cowtan-Way coverage-corrected HadCRUT4, along with their respective 95% confidence intervals.  Why did I pick those three?  Because they are the surface data sets that cover the entire surface of the planet, without any major coverage gaps. 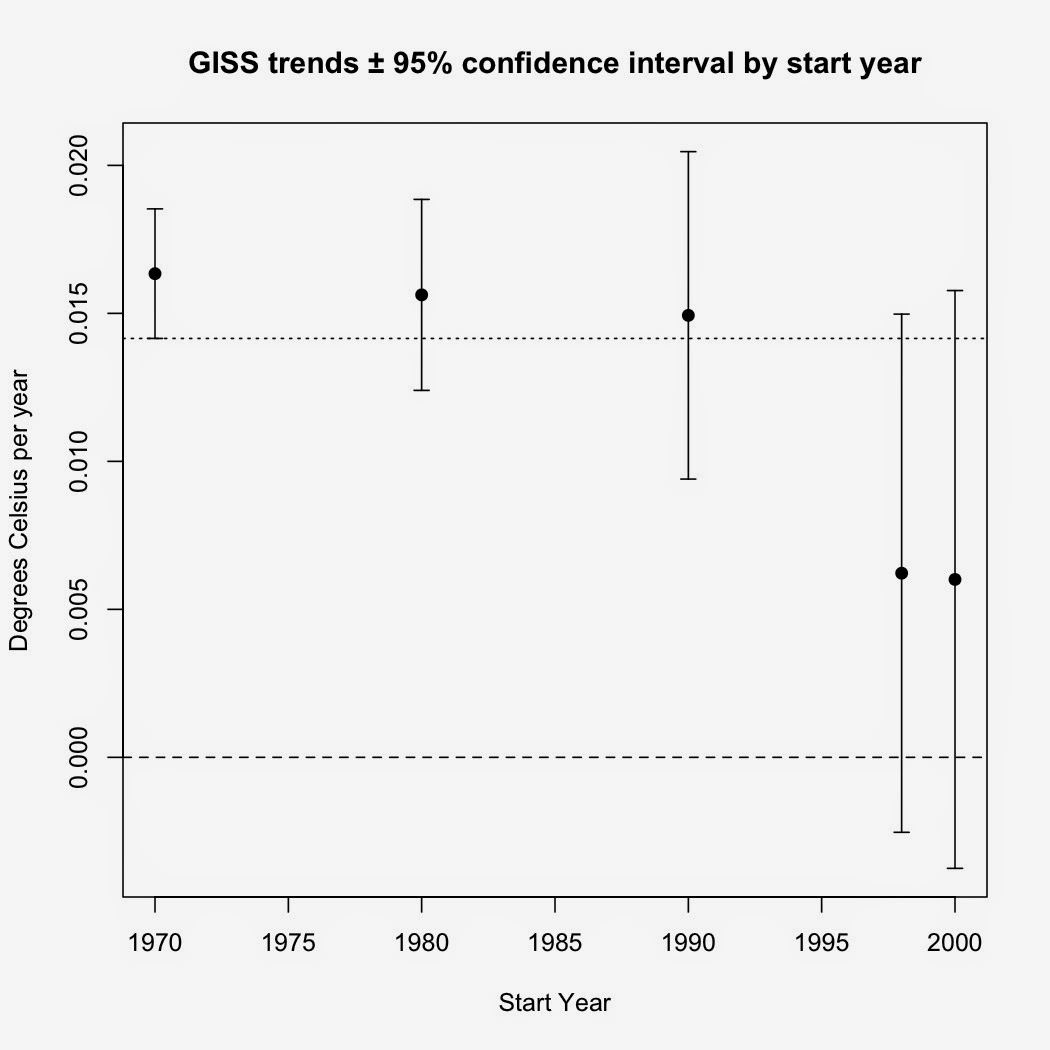 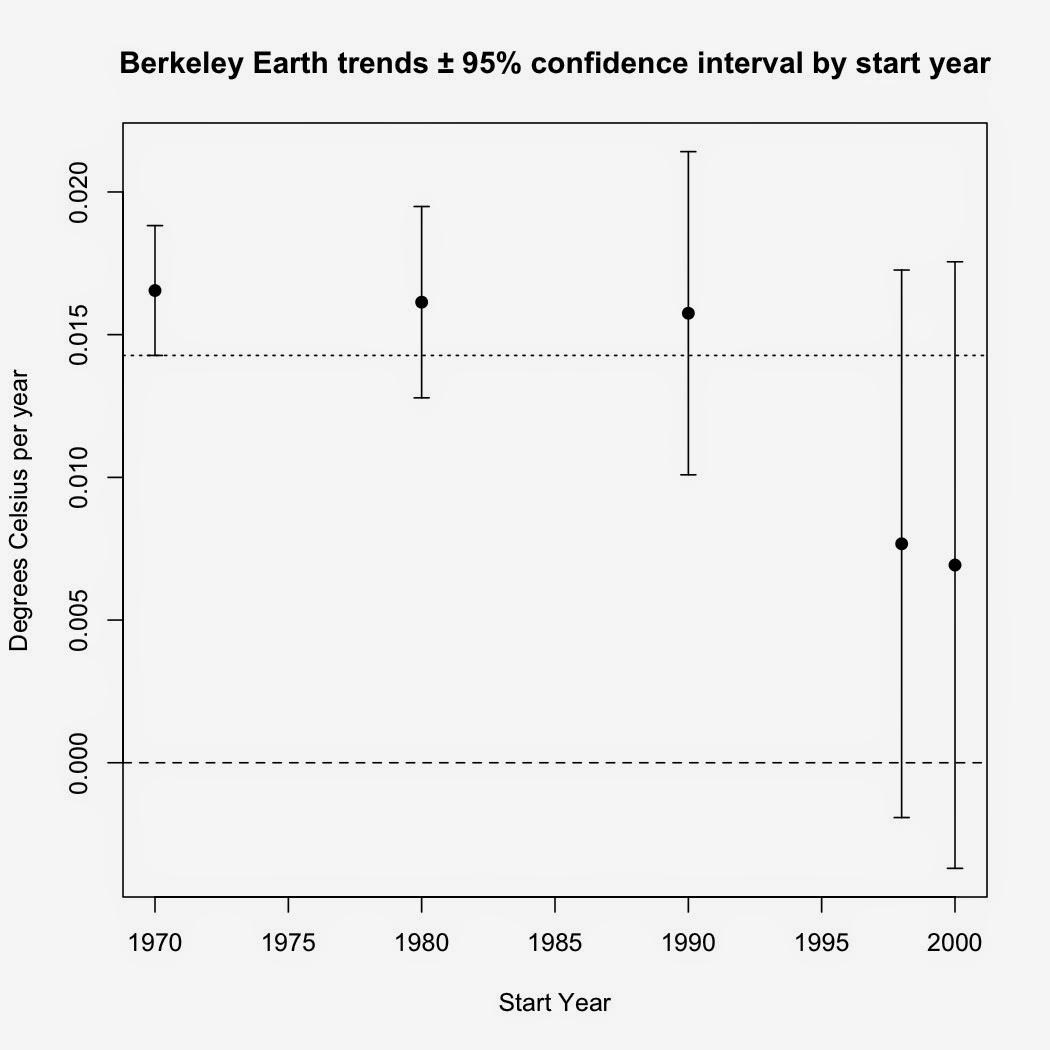 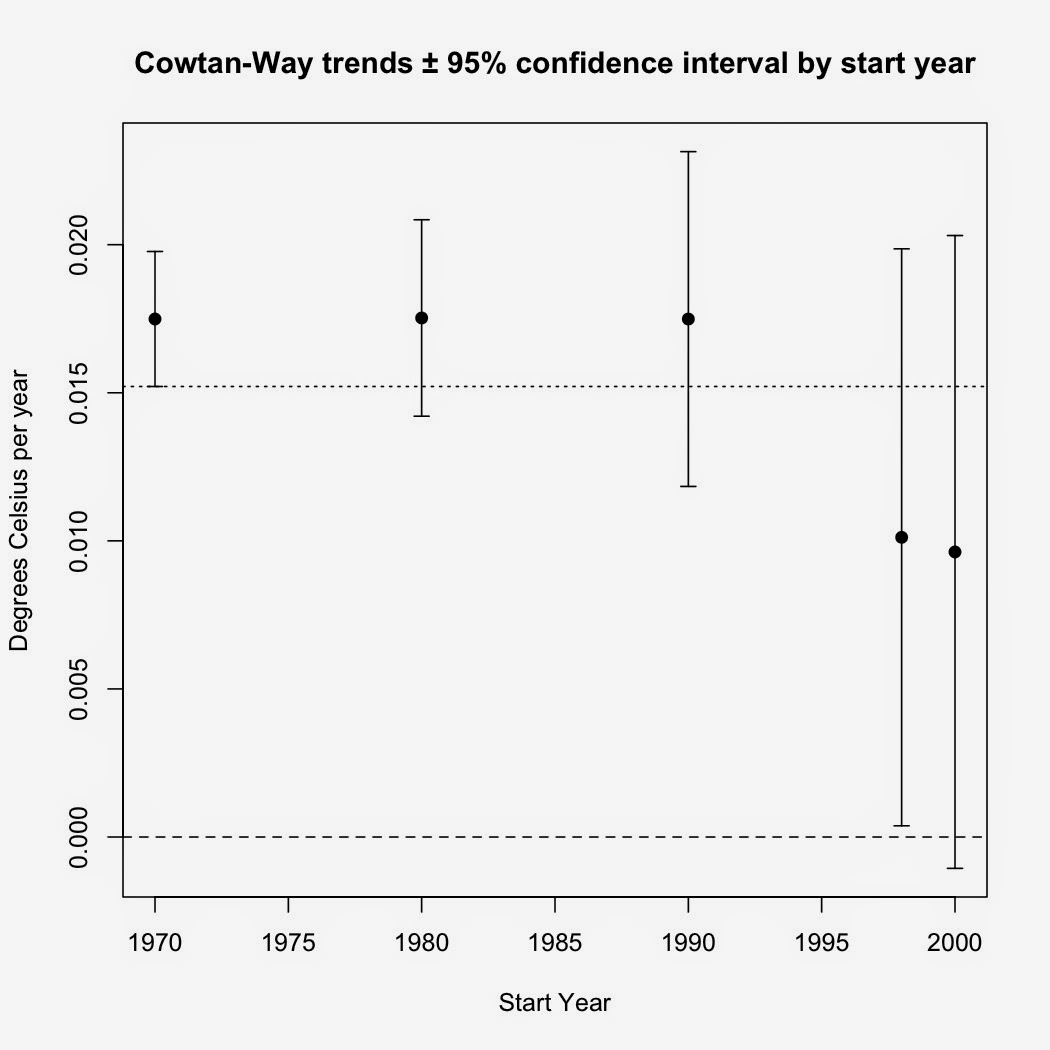 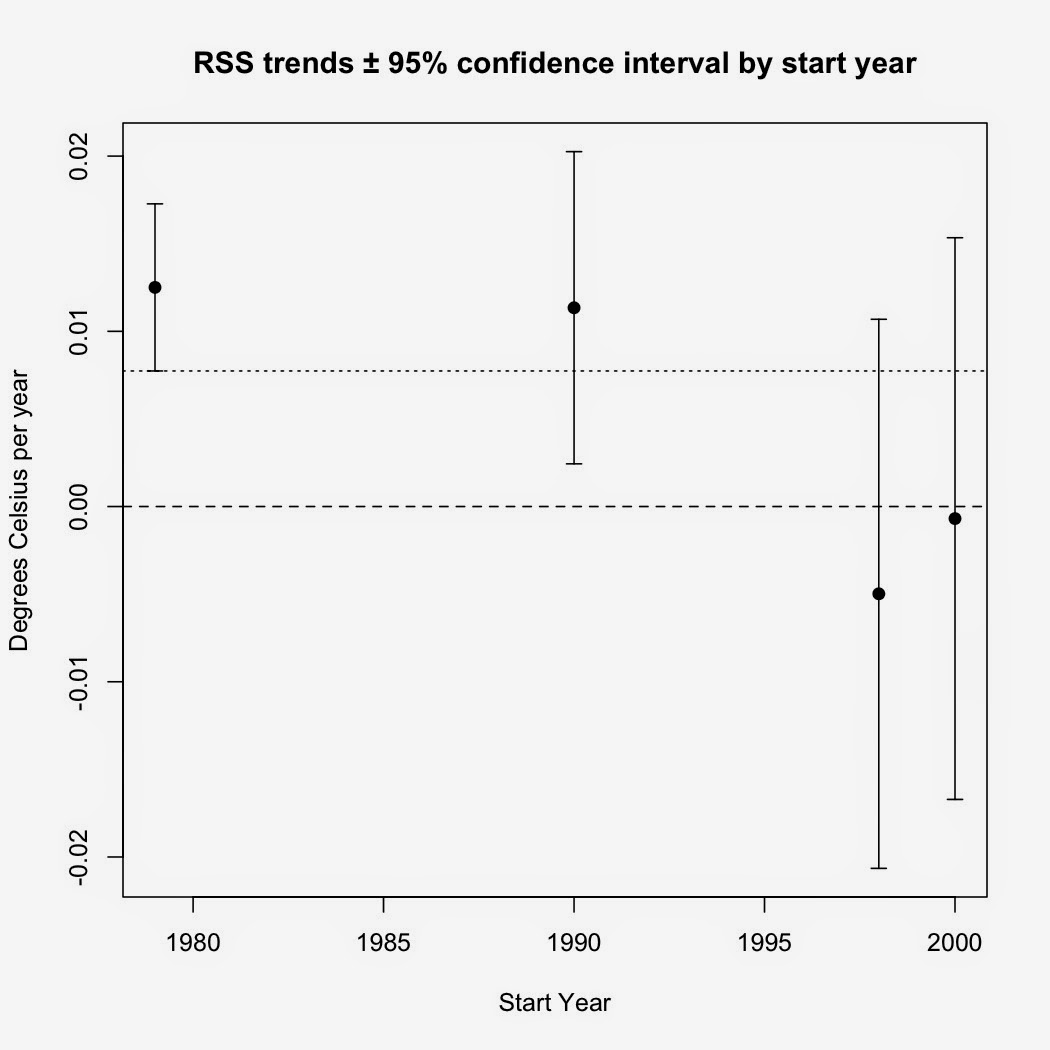 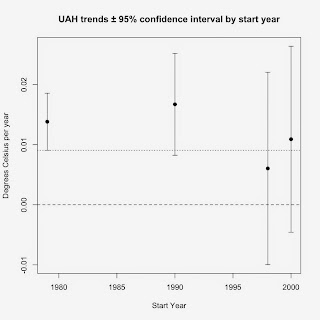 Again, no statistical difference between the trend since 1998 and the trends starting at other years, as the 95% confidence intervals all overlap.


2.  Temperatures since 1998 have generally been above the trend 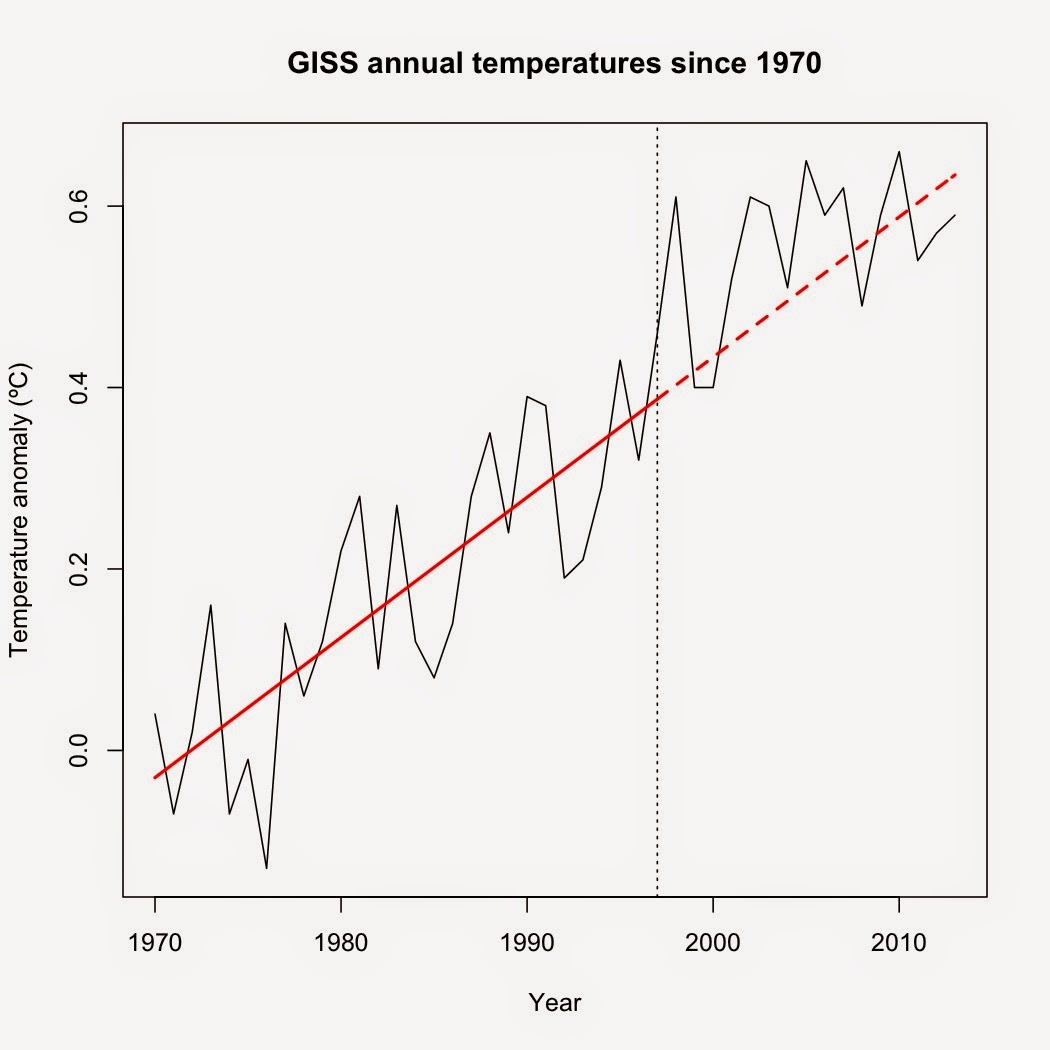 Temperatures since 1998 have generally been above the 1970-1997 trend.  GISS isn't the only example, either.  Here is the same analysis applied to Berkeley Earth, Cowtan and Way's data, UAH, and RSS: 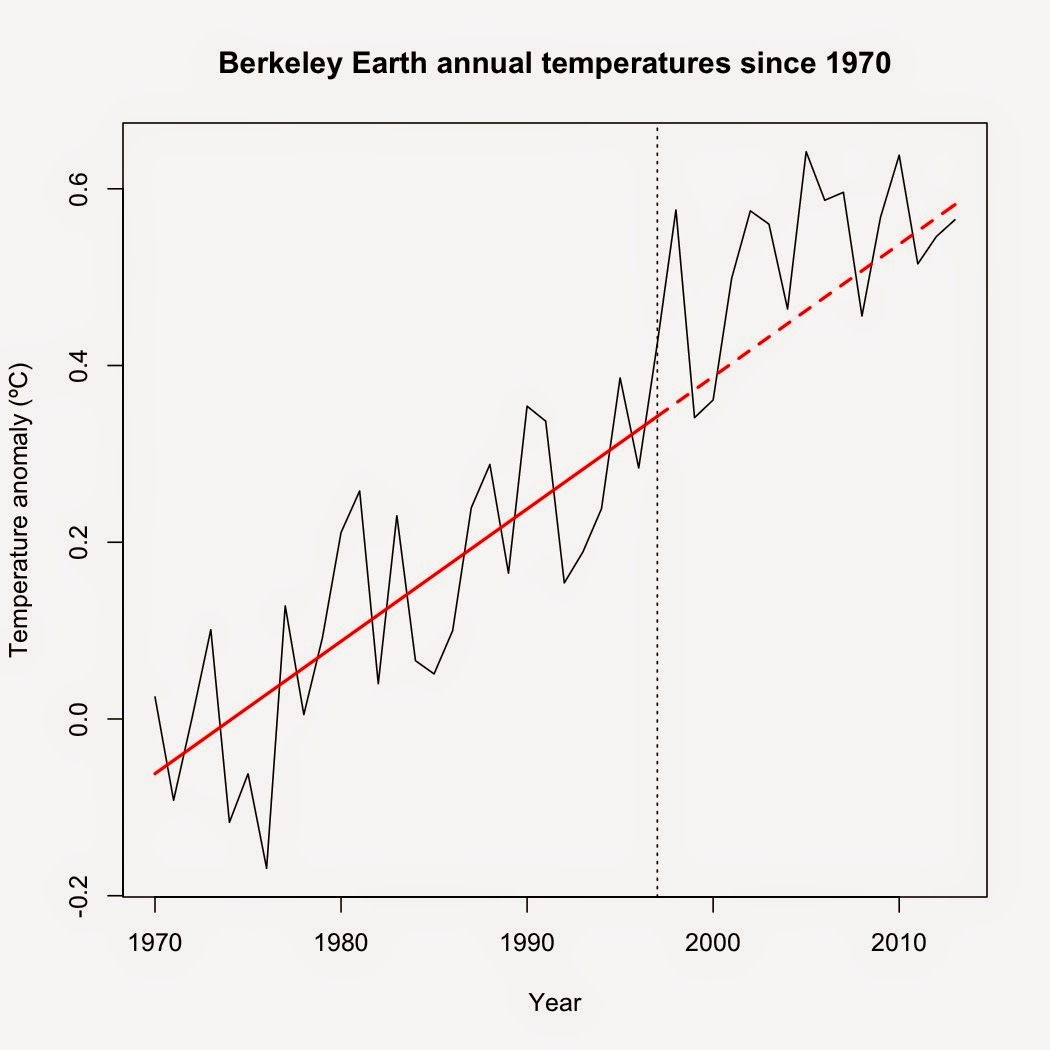 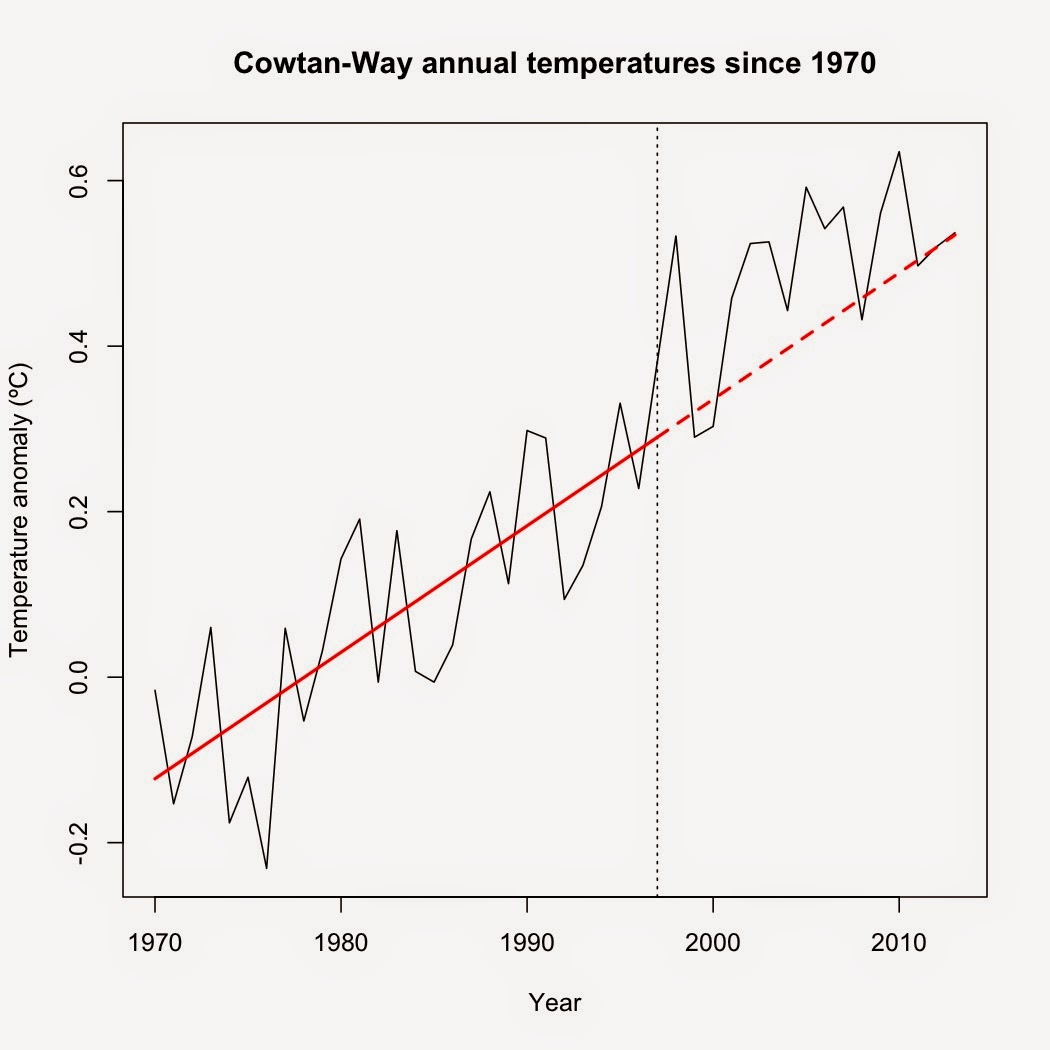 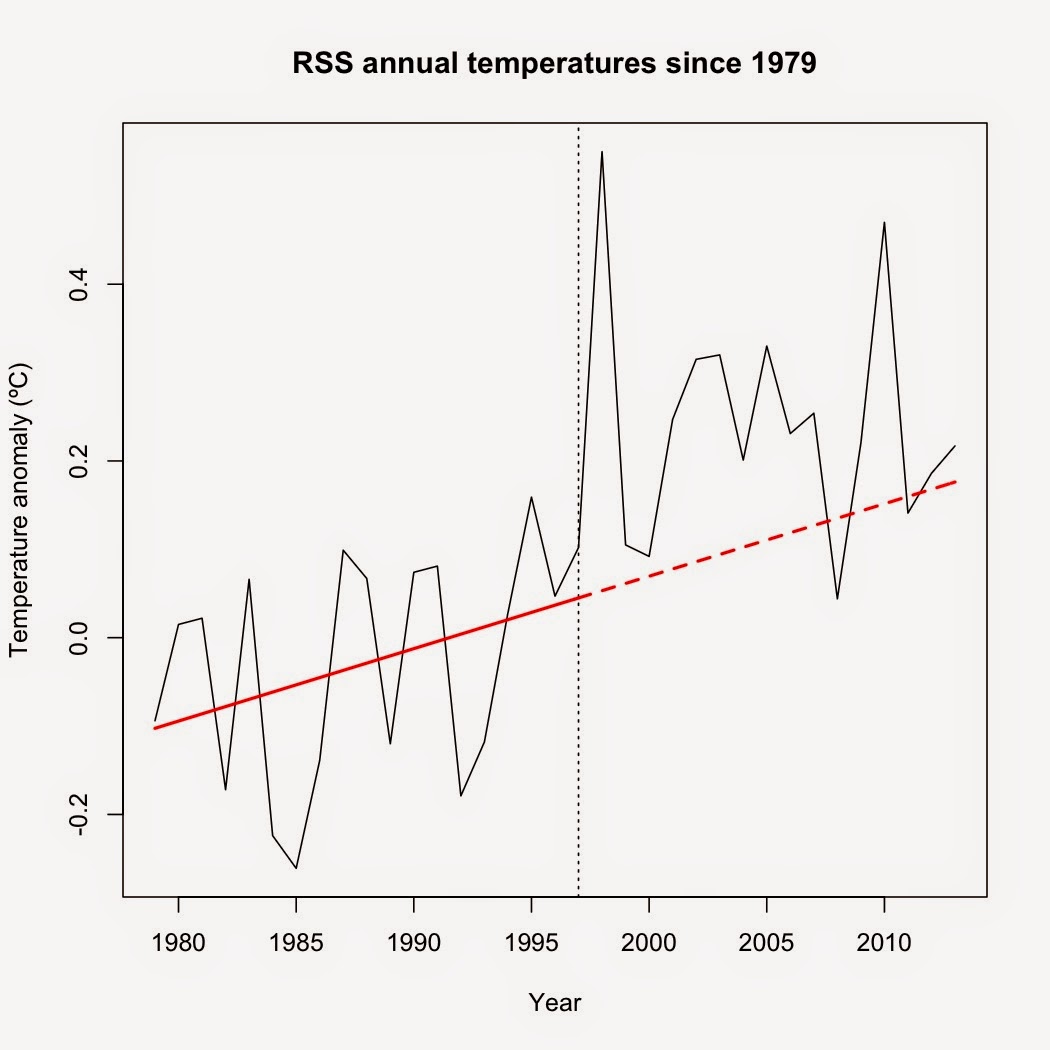 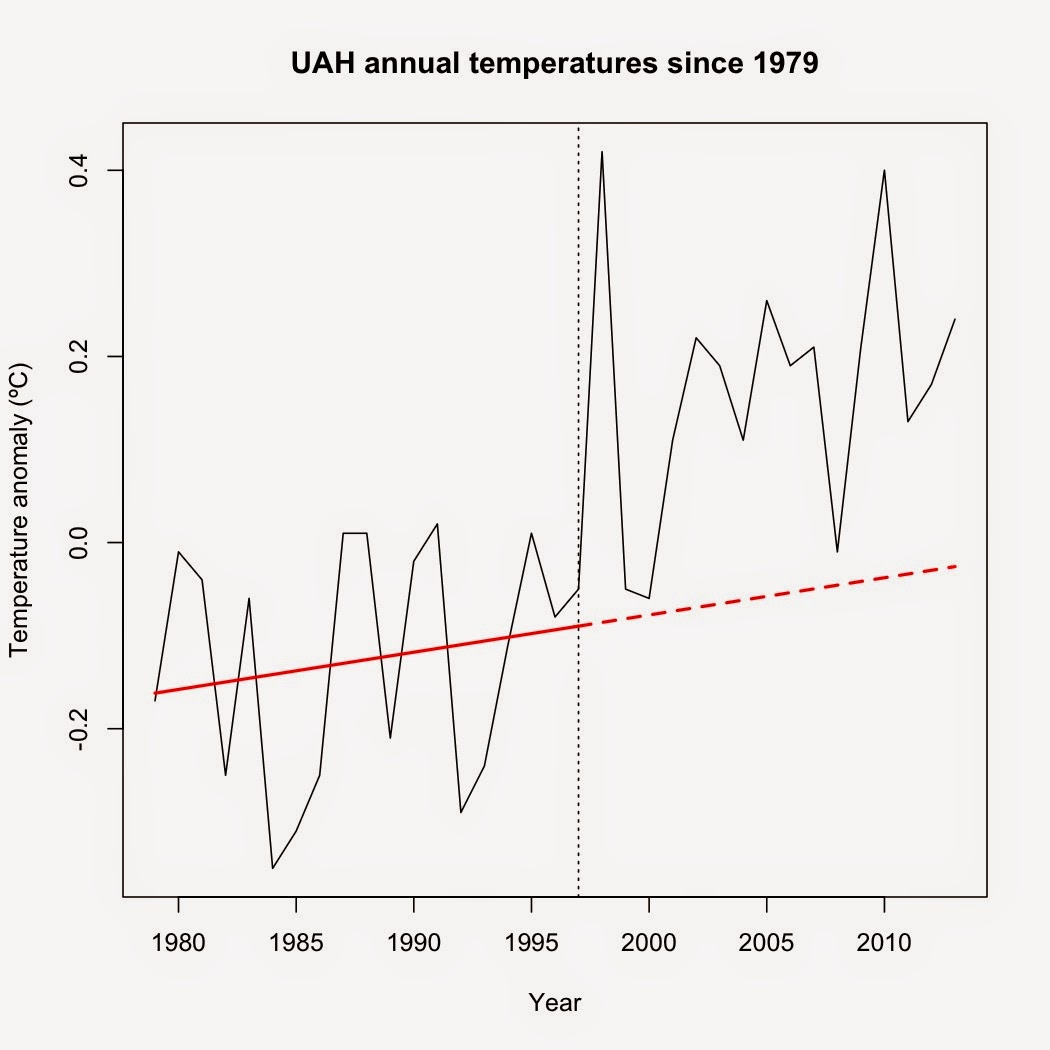 What is most striking is that satellite temperatures since 1998 have been higher than the 1979-1997 trend predicted, especially the UAH satellite temperature record, which has been entirely higher than the 1979-1997 trend since 1998.  Here's a hint for climate science deniers: Having more data points since 1998 above the pre-1998 trend than below is not a sign that global warming has stopped.


3.  The "global warming has stopped" meme is entirely dependent on a single data point.

Take a look at the trend in annual average temperatures from 1997 to 2014 (year to date) with and without 1998.  P-values in black are statistically significant.  For those who really want to know, yes, I did check for autocorrelation when calculating the p-values.


While GISS, Berkeley Earth, and the coverage-corrected version of HadCRUT4 from Cowtan and Way all show statistically significant warming since 1998, removing 1998 makes the trends far stronger.  The effect on the satellite temperature record is more dramatic.  RSS goes from a slightly negative trend to a positive trend.  UAH goes from not statistically significant to strongly significant.  In short, removing 1998 makes the "pause" disappear.  This shows the power of starting or ending a trend near an extreme outlier—the outlier dramatically alters the trend, in this case either decreasing a true trend or even reversing the actual trend.

Take the three points I raised above and it should be clear that global warming did not stop in 1998.  The "no warming since 1998" meme is the unholy combination of a short time series and an extreme outlier start point.  It has no scientific or statistical validity.  Those who parrot that meme are either a) ignorant of the data or b) trying to pull the wool over the eyes of their audience.
1998 Climate change Global warming no warming pause