January 30, 2015
An old friend sent David Rose's article in the Daily Mail claiming that NASA is only 38% sure that 2014 was the hottest year on record due to the margin of error.  Unfortunately, while Rose has his facts largely correct, he jumps to the entirely wrong conclusion.


Rose bases his article on the following slide from NASA: 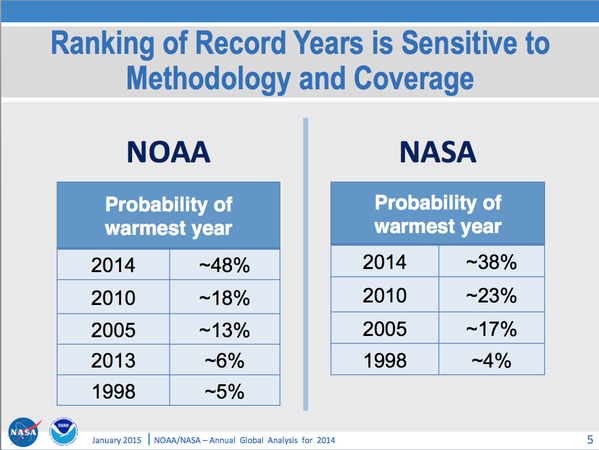 What NASA (and NOAA) did was to use a Monte Carlo analysis to calculate the probabilities that each year was the warmest year (Arguez et al. 2013).  Their analysis depends on sampling with replacement, which is akin to throwing all the data you have into a large hat, pulling each data point out, recording it, then throwing it back into the hat, mixing it up, and pulling out the next one.  After sampling however many data points you want, you record the average (or standard deviation, standard error, etc), toss all the data back into the hat, and repeat the whole analysis again, usually around 10,000 or 100,000 times.  The result is a distribution of averages shaped like a bell curve, giving the range of possible averages and related probabilities.

After using Monte Carlo analysis to generate the distributions of averages for each year, NASA scientists then compared the distributions and calculated the probability that each year was the warmest on record.  They found that 2014 had the highest likelihood of being the warmest year on record, nearly 1.7x greater than that of 2010 (38% ÷ 23%) and 2.2x greater than that of 2005 (38% ÷ 17%).  Note how I compared the probabilities of 2014 versus the other years.  That is the step that David Rose failed to do—and it is the main reason his article is worthless.  2014 has by far the greatest chance of being the hottest year on record, far greater than the other hot years, regardless of the margin of error in the averages.  Far from showing that NASA's conclusion is worthless as Rose implies, it strengthens the case that 2014 was indeed the hottest year on record.

Rose's article is a prime example of what happens when a person with limited knowledge attempts to interpret a scientific document—they misinterpret what they're reading because they do not have the necessary background.  A course in statistics would do wonders for Rose, especially since he routinely botches any sort of statistical analysis (e.g. here and here).  Statistics would also do wonders for all the denier blogs that mindlessly repeated Rose's claim.
2014 David Rose GISS hottest year Monte Carlo NASA NOAA