Doom and gloom or realism?

May 17, 2015
Humanity is in trouble with climate change.  A recent article in Vox by David Roberts came to that conclusion.  It begins with


"There has always been an odd tenor to discussions among climate scientists, policy wonks, and politicians, a passive-aggressive quality, and I think it can be traced to the fact that everyone involved has to dance around the obvious truth, at risk of losing their status and influence.

The obvious truth about global warming is this: barring miracles, humanity is in for some awful shit."

The basis for that conclusion?  Total carbon emissions to date, which are closely following the RCP 8.5 curve from the IPCC. 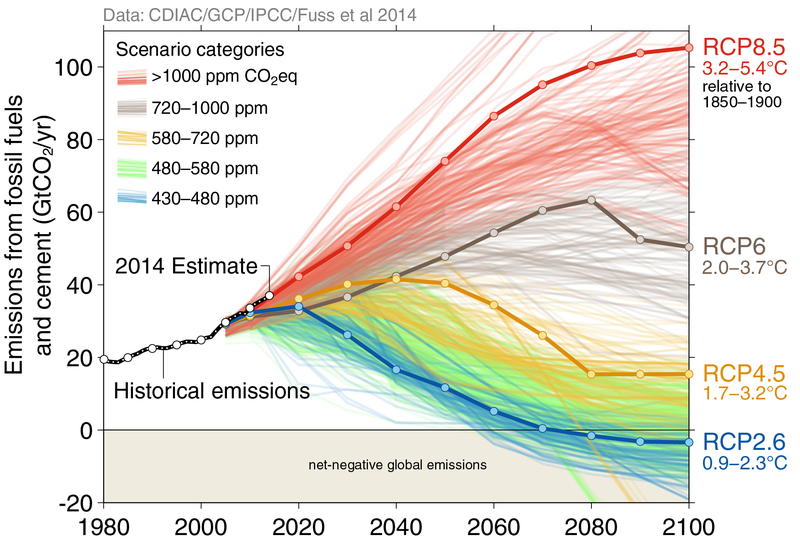 That black curve is emissions to date.  We as a civilization are on track to take carbon dioxide levels to around 1000 ppm by 2100 AD.  The 12-month moving average of atmospheric CO2 levels shows that we're already at 398.83 and still accelerating upward. 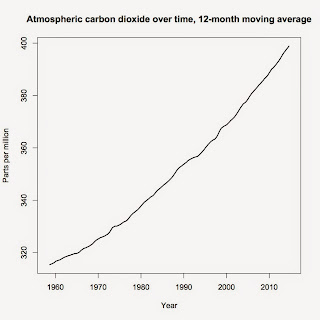 That locks us into at least 1.53ºC of total warming as of now, assuming that the current situation wherein other anthropogenic effects (methane, aerosols, etc) continue to largely cancel each other out as has been the case for the last several decades.  At the current rate of increase, we'll blow past 444 ppmv in 2034, just 19 years from now, and be locked into at least 2ºC of warming.

The main reason Roberts is so pessimistic is that all the scenarios in which we avoided the worst of climate change assume that civilization will suddenly switch to wind power, solar energy, and other forms of energy and deploy technologies—especially carbon capture—to deal with the carbon dioxide that is already in the atmosphere.  The models also assume that humans will end the use of fossil fuels just as quickly.  Beyond those possibly overoptimistic assumptions, the sheer rate at which emissions would have to decline at this point to avoid blowing past 2ºC of total warming is  4 to 6% per year, far beyond any rate ever achieved before.  In other words, it won't be easy but, as Joe Romm wrote, it will be much cheaper and easier than trying to live in a 4ºC world.

While I share Roberts' concern and some of his pessimism, we haven't hit the point of no return yet.  I'm still hopeful that humanity can turn itself around before reaching the 444 ppmv level.  It may be hope without reason but as long as we haven't hit 444 ppmv, there's still a reason to agitate for changes in governmental policy to keep us below that level.  And yes, to the dismay of many American conservatives, it's going to take governmental action along the lines of WWII to pull this off.  We've dilly-dallied too long and allowed too much carbon dioxide to build up for individual actions to suffice.  Sorry.

Of course, as Winston Churchill quipped, "You can always count on Americans to do the right thing - after they've tried everything else."  Another way to look at it: Americans won't take climate change seriously until it affects them personally.  Here's hoping that America—and by extension the world—gets its wake-up call(s) in time.