US versus global temperatures

July 21, 2015
One of the talking points I see (and hear) time and again here is the question "If the world's getting hotter, why is it cold here?", "here" usually referring to the eastern United States.  Another variation goes "Global warming can't be happening because US temperatures haven't risen in _____ years."  Yes, it's the good old "It's cold in my backyard so the planet can't be warming up" argument. Here's why it's dead wrong. 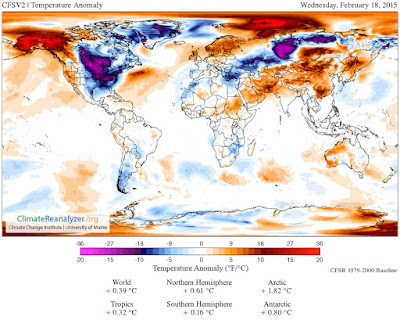 I chose this image deliberately. Why? First, it comes from the coldest stretch of weather in the eastern US this past winter. Second, it shows that although the eastern US was very cold compared to the 1979-2000 average, that chill did not extend to the rest of the planet—or even to the rest of North America. The west coast of North America, for instance, were unusually warm even as the area east of the Rockies was in a deep freeze.  While the eastern US and Canada froze, the average for the entire Northern Hemisphere was +0.61ºC above average. 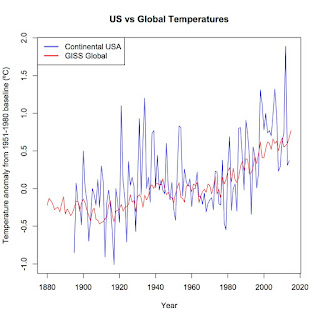 That makes sense as the global average includes all of the Earth's surface rather than just 1.6% of it. Furthermore, variability is important because it directly affects how significant trends are.  The more variable the data, the less likely any linear trend will be statistically significant.

We can measure that difference in variability by comparing the standard error surrounding a regression trend of both data sets.  Here is the trend ± standard error for both data sets since 1895.
While the overall trends are similar, there is 3.3x more variation in the US data than in the global data set.

That difference is relatively minor using long time frames. I mean—both trends were far beyond the p = 0.05 demarcation line.  However, it becomes very problematic if you use short time frames such as those favored by most climate deniers.  Here are the trends for both GISS and US data for the last 15, 20, and 30 years with standard errors and p-values (bold = statistically significant):


For those who are more visual, here are the graphs of those trends along with the loess trend since 1895:

Simply cherry-picking your time period can give you any results you want, especially with a noisy data set.  Here, for example, the linear US trend is negative since 2000, the exact opposite of the overall trend in the data set.  So, does that mean that the US is cooling?  Short answer: No.  That cooling trend is a false trend.  First, it is not statistically significant (p = 0.588).  Second, it goes against the result of the loess analysis for the entire data set, which shows that US warming has accelerated since the 1960s.  The trend since 2000 is simply the result of using a short time period and noisy data.  It is not a true trend.  In contrast, the lower-variation global data is consistent: Statistically significant warming in all time frames consistent with the results of the loess regression of the entire data set.

In short, the planet is still warming up even when the US experiences a cold snap.  But to see it, Americans must do what they are not generally able to do: Look beyond their own backyards.
GISS temperatures Global warming US temperatures