August 01, 2015
I know, I know, I'm behind a bit.  Most of the stories on the first six months of this year came nearly a month ago.  Better late than never.  By now, we all know that the world is headed toward its hottest year ever, breaking the record set just last year.  In this post, I'm going to analyze just how abnormal normal the first half of the year has been.

Here is a plot of annual temperatures since 1880: 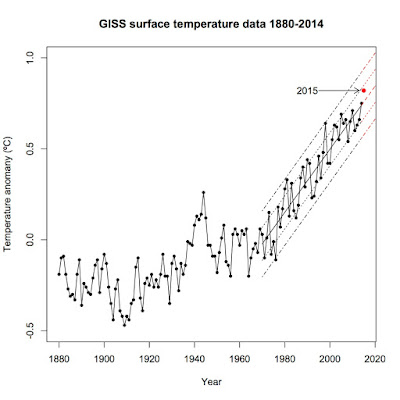 What would an exceptionally warm 2015 look like?  That depends on your definition of "exceptional."  I defined it as close to 2 standard deviations from the trend, which came to a global average of  0.94ºC or greater.  The only years that have even come near that standard since 1970 are 1983 and 1998, both years which saw monster El Niño events.  Should the current El Niño approach the magnitude of either of those events, I would not rule out either 2015 or 2016 challenging the 2 standard deviation line.  So while 2015 already looks to shatter 2014's record hot global temperature, it could get even hotter.  Stay tuned.
2015 GISS Global warming hottest average global temperature on record