August 23, 2013
Autocorrelation in global temperature data simply means that the average temperature for any one month is correlated with the average temperature of the previous month.  It is an unfortunately common problem when dealing with time series and spatial statistics.  The gist of the issue is that most of the standard statistical analysis techniques such as ANOVA, regression, and the like assume that variation in the data is random or white noise when calculating standard errors and p-values.  Autocorrelation means that the noise in the data is not random but correlated or red noise.  The degree of correlation reduces the effective size of the data set and means that the standard errors and p-values calculated from normal statistical tests will be lower than they should be and biased toward showing statistical significance when in reality the tests should not show significance.

One of the best ways to compensate for autocorrelation is to use an Autoregressive Integrated Moving Average (ARIMA) model to account for the red noise.  Here's an example of how to construct an ARIMA model using GISS global temperature data from January 1880 to June 2013.  The first task was to isolate GISS data from the larger data object and save it as a time series: 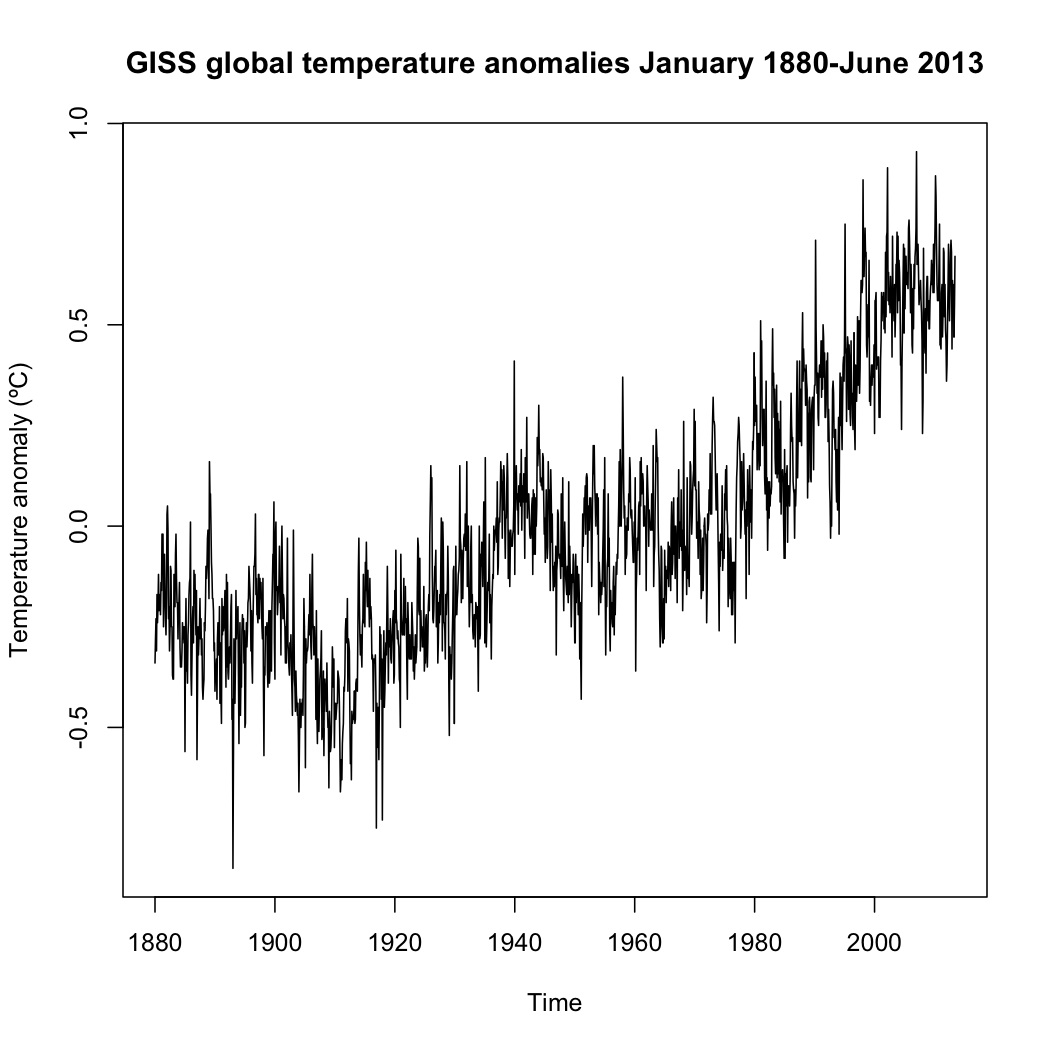 GISS is not a stationary time series as required for ACF and PACF analysis.  The trend is obvious.  In order to accurately measure the level of autocorrelation, we have to remove the trend, usually accomplished by differencing the data.  Differencing is when you calculate the difference between the data at time t and t-1. 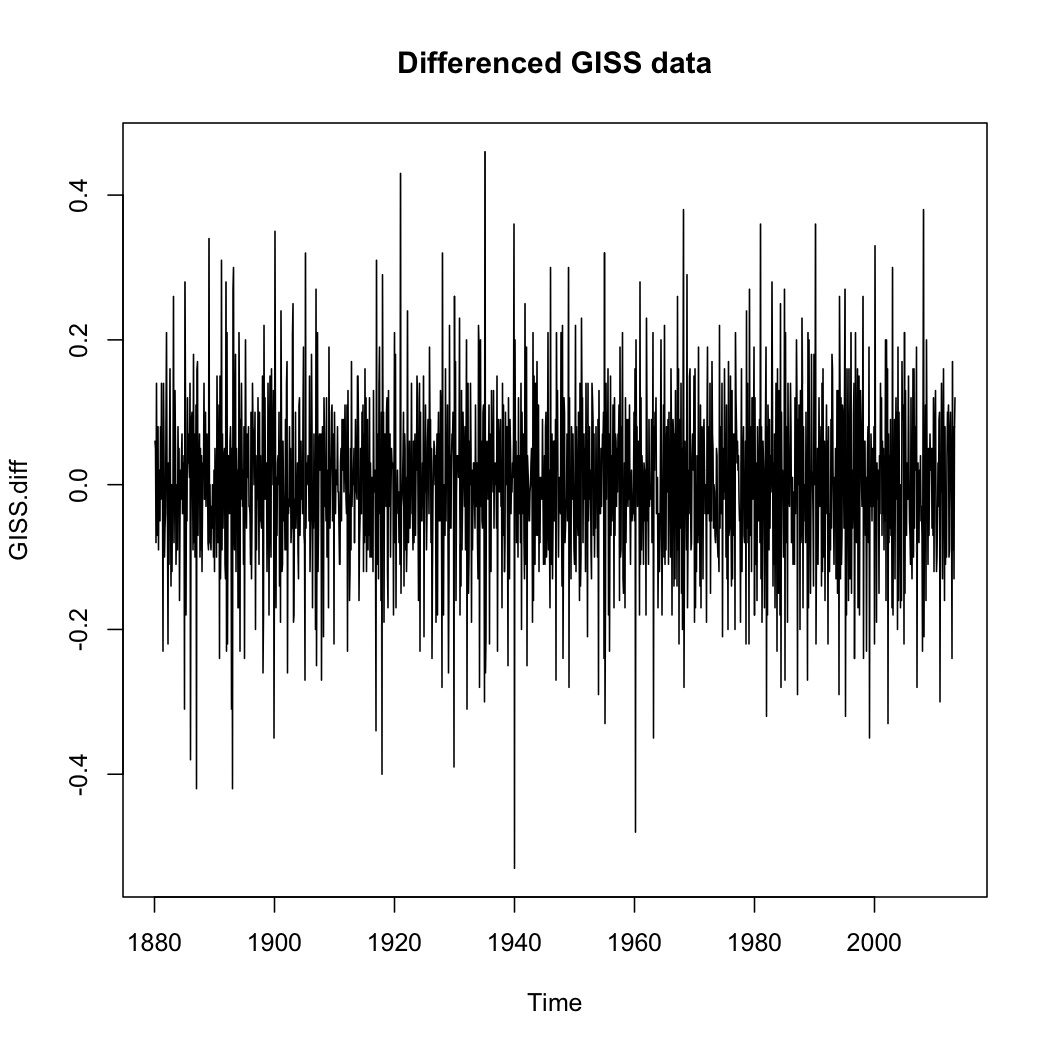 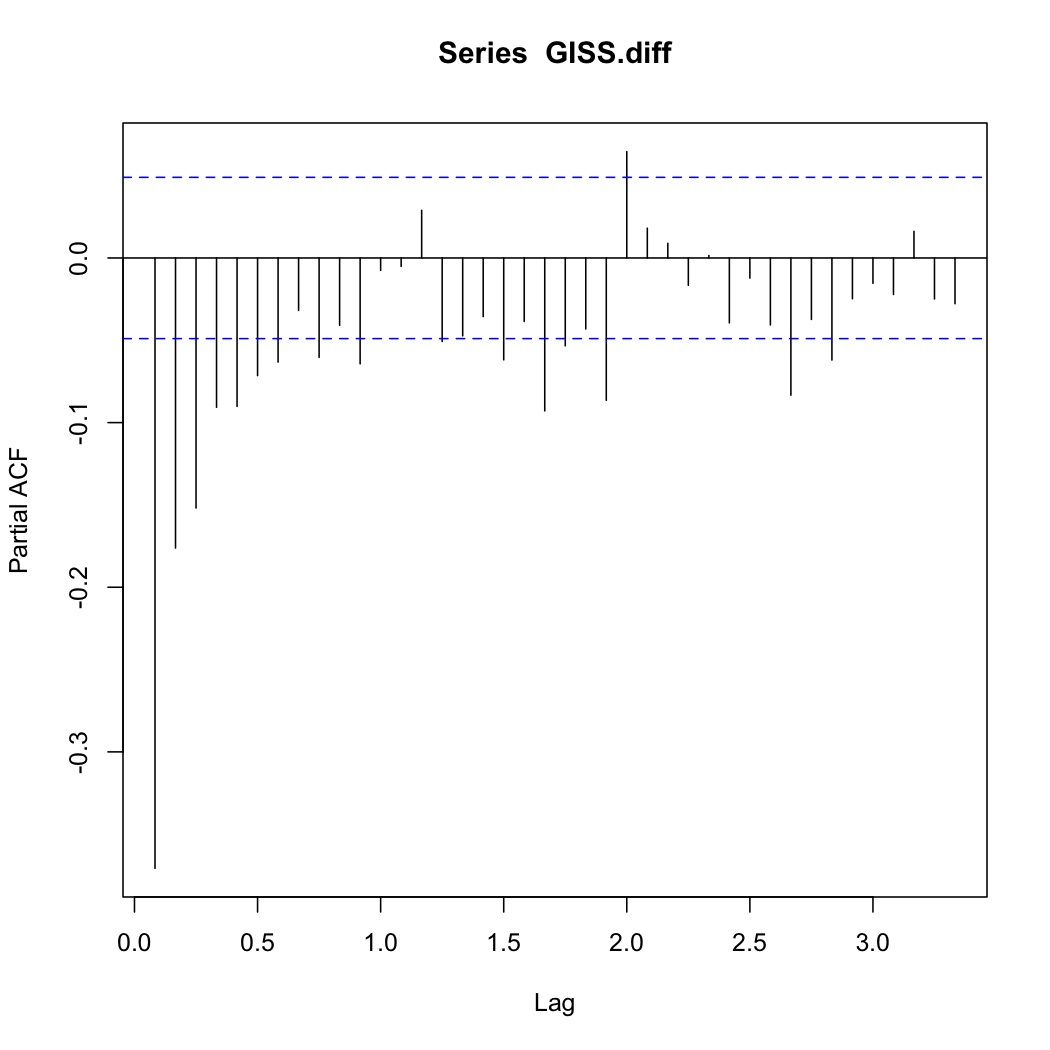 We can use this information to manually determine which ARIMA model will be most appropriate.  The ACF suggest AR = 1 and we had to difference the data once so I = 1.  The MA would have to be at least 1 but possibly 2 if the trend is accelerating.  We could figure out which is better by trial and error or we can just allow R to figure it out for us. 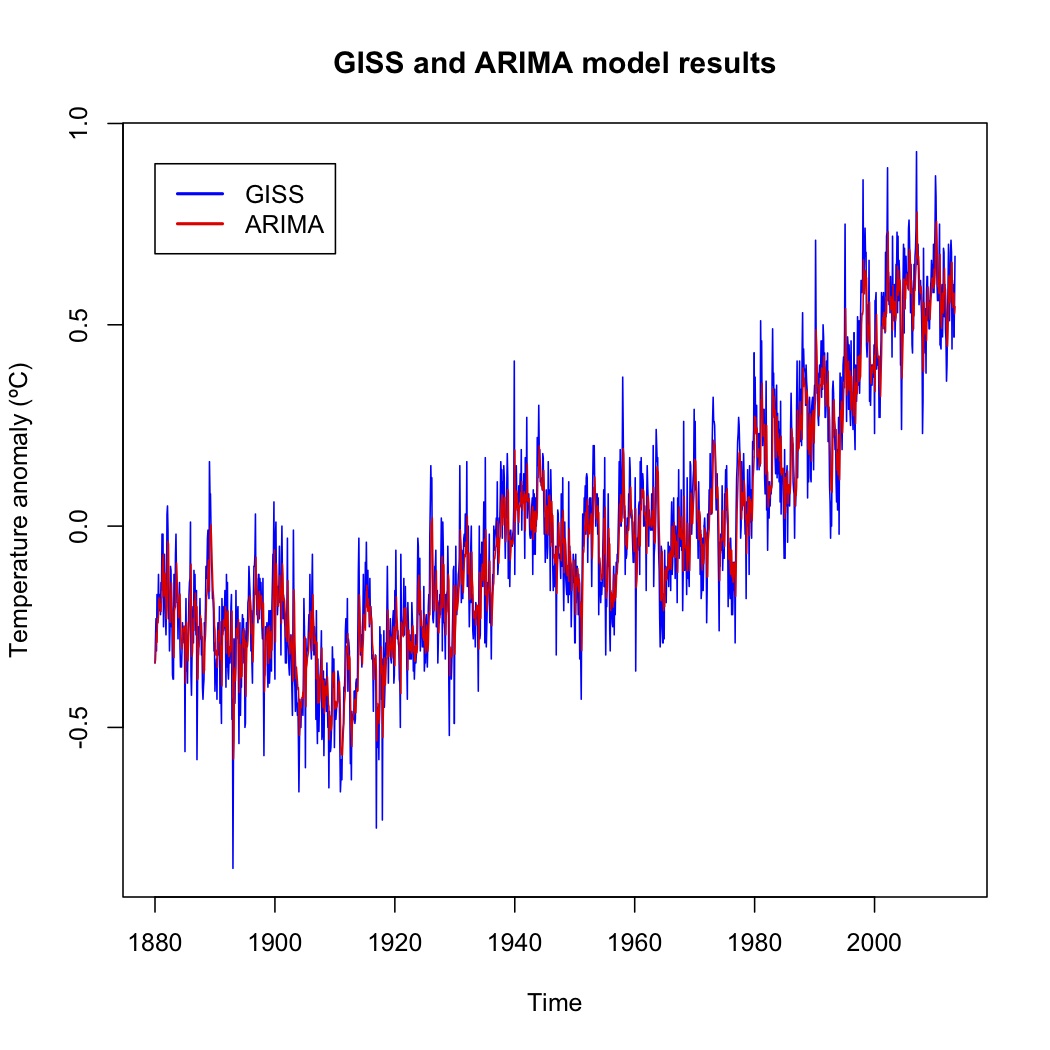 We can use the ARIMA model of the temperature data in various ways, including forecasting the short-term behavior of the data and adjusting standard errors and p-values in regression models.  How do we incorporate ARIMA models into regression models?  It's pretty easy with R, actually.  First, I calculated a regression of the GISS data as normal, assuming white noise:

Next, I used ACF and PACF on the residuals of the regression model to check for autocorrelation:

As expected, the residuals do show autocorrelation, with the ACF and PACF showing an ACF = -0.371 between adjacent months, as well as a seasonal signal.  I then used auto.arima to compute the best model:

The resulting model is an ARMA(1,1).  I wouldn't have expected the residuals to need differencing, as the trend had already been removed.  If the residuals did need differencing, then it indicates that my regression model needed another term as it didn't include the full trend.  And since I already included an acceleration term (Time2) in the regression model, the MA term is only first-order to remove the seasonal cycle.  I incorporated the ARMA model into a regression analysis using generalized least squares from the nlme package:

While this seems like quite a bit of work to go through if the overall regression doesn't change, it's necessary to get things right.  And that is the ultimate goal of science.
ACF ARIMA ARMA autocorrelation generalized least squares GISS global temperatures gls PACF R