Arctic sea ice past and present

July 28, 2013
I've previously written about the recent changes in polar sea ice.  This post compares the current trends in Arctic ice with the previous century.  I've recently read several claims that the recent melting is matched by melting episodes in the 1920s and 1940s.  However, those claims are pure bunk.  Walsh and Chapman (2001) compiled records on Arctic sea ice extent since 1870 (updated data available here).  I've graphed their July-September average, together with the July-September average measured by satellites since 1979: 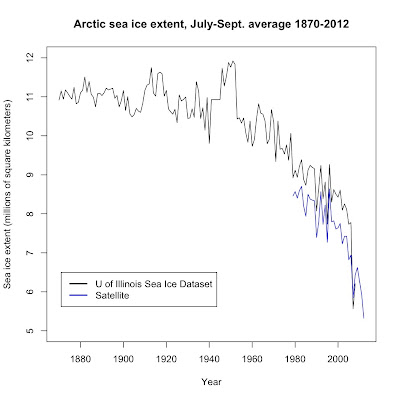 As you can see, the current melting is far below any melting episode of the 1920s and 1940s.  The historical data shows that the Arctic melting really started in the 1950s, disproving the relatively common claim that 1979 was a peak year for Arctic sea ice.  The unusual nature of the current melting is further demonstrated by comparing ice extent maps today with monthly ice maps compiled by the Danish Meteorological Institute (DMI) between 1893 and 1956.

While the maps are not to the same scale, the extent of the melting in 2013 compared to the same month in 1938 is clearly visible, especially around the east coast of Greenland and the Russian Arctic coast.  Why did I pick 1938?  The 1940 map isn't available due to World War II and 1938 was the second-lowest extent of the early 20th century.

Extending the comparison further into the past, here's the main results from Kinnard et al. (2011), which reconstructed Arctic sea ice extent back 1,450 years: