July 24, 2013
One of the main issues I encounter when I talk about global warming is people are confused about the distinction between climate and weather.  The two are related but fundamentally different phenomenon.

Climate is weather averaged over years.  NOAA uses a 30-year average to determine climate.  Santer et al. (2011) calculated that you need over 17 years of monthly global temperature data to reliably detect trends in climate.  Weather is the random fluctuations around the climate average.  Here's an explanation of the difference between climate and weather from TeddyTVNorge:


Next time you hear someone talking about how "It's cold in ____" or "It's hot in ____" or "Last year was hotter!" as either evidence for or against global warming, you know that they're focused on the weather dog.  It's the long-term climate trend that counts, not the weather dog.  Speaking of which: Here's the current 30-year trend in GISS temperature data calculated using the SMA function in the TTR package for R: 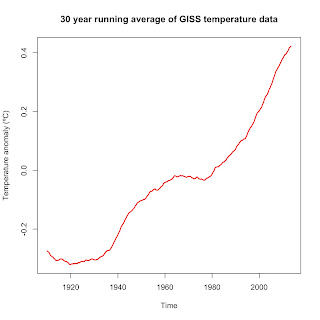